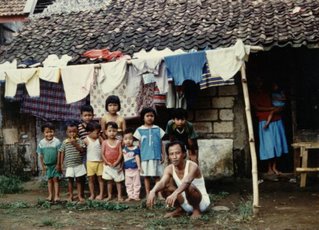 While enjoying a cup of coffee in the staffroom, I got talking to Carmen about the lives of Indonesian children. I told Carmen about Hamid in Pasar Mayestic, Marni the thalassaemia girl in Pelabuhan Ratu, sad Agosto in Bogor and Iwan the boy with leprosy.

"Hamid looks like a survivor," I said. "He must have guts to survive in Pasar Mayestic. But Marni and Agosto look near to giving up; and Iwan is heading for disaster if he doesn’t take his leprosy medicine."

"You know at the beginning of the 20th Century," said Carmen, "life was rough for some British children working on farms. I was reading about a child called Angus who had to work like a slave when he was a child. He had to be tough to stay alive"

"I suppose children were forced to leave school at a young age," I commented.

"Angus’s parents were poor and gave him to a farmer; they sold him," said Carmen. "Angus had to work seven days a week from early morning until late at night. He could be beaten if he complained. He lived in a freezing cold building with no toilet or bath and he’d be fed scraps. Britain this century. At least in Indonesia it’s warm and you can bathe in a river."

"Selabintana was cold at night!"

I told Carmen about the judge’s house.

"Maybe he has a rich wife," she said. "Anyway, people say there’s just as much corruption in Britain and Europe as in Indonesia."

"I suppose in the West it’s more cleverly covered up," I said.