The scent of flowers 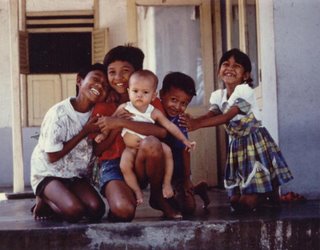 Having dealt with Dian, I took a stroll through a section of Bogor near Empang. It was an area I had not been to before and I had a feeling of pleasant excitement. I dawdled contentedly past an old church with a sharp steeple and next to it a large Christian school painted in dark colours; I wandered down a long flight of very steep steps decorated with colourful graffiti; I roamed along a dark river bank. The air was hot and humid and filled with the scent of Peacock Flowers and urine. The narrow tree-lined lanes were crowded with street vendors with poles over their shoulders; some poles supported pots of steaming soup and noodles, some carried flashing mirrors, and some bore light tables and chairs. Children were pulling along home-made toy cars attached to sticks or attempting to play games of football. I could see that West Java was over populated. There were babies and pregnant women at every street corner, at every door, and in every room, or so it seemed.

I turned a corner and there, seated at a snack stall, was a girl with the most beautiful face I had ever seen. Shall I compare her to a summer’s day or a day during the rainy season? How come this face began, according to some versions of Big Bang theory, with nothingness? Billions of years ago, time and matter apparently didn’t exist. Then bang, the universe was created, leading to this lovely visage. I was giddy just thinking about it. Were there even more beautiful faces in some parallel universes?

So I continued my journey. Having passed a happy group of little children outside a green roofed mosque, I climbed up and down various steep concrete paths, and eventually descended to a muddy brown river sided by a terrace of wooden houses. Outside one tumbledown shack sat a young woman of striking appearance. She had once been beautiful but now she looked wasted and grey.

"Are you getting any medicine?" I asked.

"And you’re not yet better?"

I went with her to Bogor’s Menteng hospital. On the way she was struggling for breath.

"It doesn’t look good," said the doctor, in English, holding up an x-ray. "Suti says she’s taken the pills, off and on, over many years. The trouble is that if they stop taking the medicine before they’re cured, then the disease becomes drug resistant. Over the years her organs have been seriously damaged. I’m afraid she won’t last long."

"She’s single and lives with her mother. The mother is apparently fit."

I arranged for Suti to get regular supplies of medicine, but learnt some months later that she had died. What a mixture Bogor was: the scent of flowers and the scent of death.