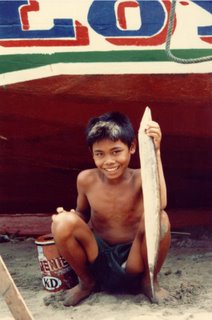 After a night at a clean, air-conditioned hotel in the nearby hill resort of Selabintana, a hotel apparently owned by the army, I motored to Pelabuhan Ratu on the South coast. I booked into the Samudra Beach Hotel.
Walking East from the harbour I took photos of fishing boats and palm trees and enjoyed the salty sea breeze. Near some rice fields and a bat cave, I stopped to talk to a barefoot woman carrying a girl aged about seven. The girl, called Marni, looked pale yellow and her stomach was swollen.
"Is she sick?" I asked.
"She’s been ill for years," said the mother, whose own body was podgy and pale.
"Have you been to the local hospital?"
"My husband’s dead. I’ve no money."
We reached the simple little hospital in five minutes and consulted an earnest young doctor who did a blood test.
"It looks like Thalassaemia," he said. "That’s anaemia caused by defects in the genes that make haemoglobin. It’s inherited and quite common in this part of Indonesia. The girl’s father seems to have died from it."
"What can be done?" I asked.
"She’ll need repeated blood transfusions," said the doctor, in English. "We could get some blood by tomorrow from Sukabumi. Kids like Marni don’t always live too long. It depends on the type of Thalassaemia and on the treatment."
The doctor explained some of this to the mother.
"Does she want Marni to have a blood transfusion?" I inquired.
"No," said the doctor. "She says the girl doesn’t want a transfusion."
The girl was quietly weeping.
"But what about the mother?" I said.
"She says no."
"Are blood transfusions safe?" I asked.
"Blood transfusions can lead to a build up of iron, which can be fatal."
"What about AIDS?"
"That’s another risk."
The mother was determined that there should not be a transfusion, and maybe she was right, but I left her some money to pay for treatment in case she changed her mind.
I walked West from the harbour and after a few miles came to a wooden restaurant built on stilts. An old man appeared from inside and invited me to have a beer and some fresh fish. As I enjoyed my feast, I watched the surf roar in towards the blue and yellow fishing boats and thought that this could be paradise, if it wasn’t that the south coast suffered from poor roads and malaria.
Next morning, before returning to Jakarta via Bogor, I returned to Marni’s one room shack but there was no one there.
"The mother’s out working in the fields," said a middle aged man with strong muscles and thick dark hair, "I’m the community chief, the RT, and I’m related to Marni."
"I was going to give the mother some money for food," I said.
"Give it to me and I’ll make sure she gets it," said the man.
If he was the RT, the community chief, maybe he would be helpful. I gave him the money.