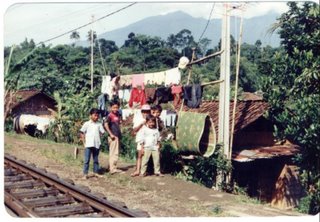 The following sunny Saturday found Min, big-brother Wardi and I on a trip to the hilly town of Bogor. We drove past the perfect lawns of the elegant white 19th century Bogor Palace, once the official residence of governor-generals of the Dutch East Indies, and on through the busy central area with its churches and mosques, its crowded markets and green minibuses. Min and Wardi seemed to be enjoying the ride.

"Is this town like Lamaya, where you used to live?" I asked Wardi.

"A little similar," he said. "Lamaya is smaller and flatter."

"Bogor has some very rich people," I commented. "What about Lamaya?"

"A few of the Chinese Indonesians there are rich."

Three kilometres south of the town, we came to a neighbourhood known as Batutulis which is named after a famous piece of stone, kept in a small museum. The Batutulis is inscribed with several words of Sanskrit which tell of the supernatural powers of a 16th century Hindu ruler of the Pajajaran kingdom. The stone is said to have mystical powers and Indonesia’s first president, Sukarno, had a home built next to it.

"Sukarno’s house," I said, pointing to my left. I wondered how much Wardi knew about Sukarno.

"Sukarno was good," said Wardi. "He is very popular in Indonesia."

"Did they teach you about him at school?"

"I only had a little schooling," he said.

We journeyed past the Sukarno residence, crossed the River Cisadane by an old and fragile looking bridge and eventually reached a railway track. It was time for a walk.

We set off along a narrow path which sided the railway track. To left and right were shanty houses and that meant peach coloured tiles, rosy bougainvillea, and the occasional red rooster. Kids in white shirts and shorts the colour of alizarin crimson danced along on their way home from school. The sky above the volcano, Mount Salak, was of a cerulean hue and above that ultramarine. The colours were as intense as any I had seen during summer holidays on the Mediterranean coast of Italy or on the Atlantic coast of Morocco. We did not see any trains.

"Hey mister," said a little school kid, "where are you from?"

"I’m from here," I replied. I felt I belonged to this world of happy smiles and immensely bright light.

"Where are you going?" said the now puzzled little person.

"Here." This was where I wanted to be. I wasn’t going anywhere in particular.

A boy came along carrying a pigeon.

"Your cat doesn’t look too well," I said.

"Pigeon," he responded, with a grin.

Wardi looked puzzled. Min yawned. Wardi might have been wondering why I had chosen to walk alongside a railway track, rather than visit the Botanic Gardens or some modern shopping centre.

"Better than the city," said Wardi.

We came to a cluster of little huts on top of a slope and I decided to take some photos. A cheery old man in a Tommy Cooper hat was seated in an armchair next to a slumbering cat and some cadmium orange cannas. Two boys were playing marbles. Above were tangles of electricity wires and a tall flowering rose of India. I got out my camera and looked through the lens. About twenty children had materialised from various alleys and they were pushing and shoving to get the best position in front of the camera. No sign of the old gentleman. He was hidden somewhere behind all these kids. There were whoops and yells and snorts. I took one photo and put my camera away.

"In the little house there," she said, pointing to a nearby one-roomed wooden hut.

It seemed like the sort of place where, in Britain, you might keep a lawnmower. While Wardi guarded Min, I stepped inside the tiny habitation. On the floor sat a young mother and a granny, and in front of them lay a baby, bluey-purple in colour, and struggling for air.

"How long has the baby been ill?" I asked.

"Five days," said the mum, who, on the surface, didn’t look particularly worried.

"The baby must go to a hospital immediately," I insisted. "Look, it’s blue because it can hardly breathe. Have you been to a doctor?"

"That’ll be too late. The baby’s nearly dead." I pointed at the blue little face.

Granny spoke for the first time. "We’ve been to the dukun. He gave us some medicine."

"The witch doctor has not got oxygen and a drip," I said, sarcastically. "The baby needs to be in a hospital. Why can’t we go now?"

"When does he get home?" I inquired.

"We must go now to save the baby," I said loudly.

Granny spoke for a second time. "She doesn’t want to go."

It occurred to me that it is the conservatism of the poor that causes them so many of their problems. The elite are more adventurous.

I was not going to give up. I stood at the door. Then I waited outside with Wardi and Min, the latter giving me a worried look. I explained the situation to Wardi, who was apparently happy to let me take the lead in this situation. If he thought I was wasting my time he was not going to tell me. We waited and waited. I was getting hungry, as I supposed were Wardi and Min.

I couldn’t wait for ever, so I went back in.

"Shall we go to the hospital?" I said fairly gently. "We can ask the doctor what’s wrong. We don’t have to accept any medicine. Come on."

The mother picked up the blue baby and without any further words we set off towards my van. As we drove to the Red Cross hospital I just hoped the baby was not going to die on the way.

In the emergency room the doctor got the baby fitted up to a supply of oxygen.

"How long has the baby been ill?" he asked.

"It’s amazing it’s still alive," said the doctor. "It’s got tetanus. The midwife, or whoever delivered the baby, probably used dirty scissors. It’ll have to be admitted to the children’s ward."

The doctor spoke to the mother and granny and they now seemed resigned to the fact that one or other of them would have to stay with the baby in the hospital. I paid the bills, left money with the mother, explained that I would be back a week later, and then hurried off with Wardi and Min to get some fried chicken and chips.