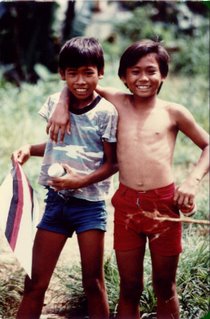 The beginning of the May half term found me exploring the area around the small Sundanese hill town of Sukabumi, at the foot of the volcanoes Gede and Pangrango. Sukabumi, which lies between Bandung and Bogor, has more earthquakes and tremors than anywhere else in Indonesia, so I was watching out for signs of dogs or chickens behaving strangely. A major earthquake in 1972 killed over two thousand people in the region.

Having left my vehicle and driver on a quiet country road, I followed a path which ran below lofty flowering trees and above a muddy river. I was looking out anxiously for snakes, wild monkeys or even leopards, but all I saw, fortunately, were big blue dragonflies and orange-yellow butterflies flitting in and out of patches of brilliant dusty light and jet-black shadow. When I took a left turn and began to descend towards the river, I could hear splashing sounds and giggles.

"Hey mister," called a young voice behind me, "you can’t go down there."

I turned and saw two grinning boys, both aged about thirteen, and both dressed in threadbare shirts and shorts.

"Women bathing," said the taller one, eyes gleaming with a hint of mischief.

At that moment a young woman wrapped in towels, and carrying a basin full of damp clothes, came up from the river and hurried past me. She had Spanish good-looks and an enigmatic smile.

I returned to the main path and was followed by the two boys who introduced themselves as Hari and Dani.

"Are you going to school?" I asked.

"You have to pay for school?"

"Yes. And for uniforms and books and outings," said Dani, putting on a serious face.

"Where are you going, mister?" asked Hari.

"OK," I replied, pleased to have some company.

Having passed some damp looking huts inhabited by grey faced people, and a stretch of green meadow which gave us views of the smudgy blue mountains, we arrived at a bridge made from bamboo. In the river below us, happy boys were swimming, washing and defecating. I could also see one child cleaning his teeth. This was a fast flowing river and not too crowded, but I imagined that, back in the overpopulated city of Bogor, the use of the river as a bathroom was a cause of that city’s ever-present typhoid.

Before I could say the word ‘salmonellosis’, Hari and Dani had stripped off their shirts and jumped feet first from the bridge into the river. Dripping with water, they then clambered back up to join me on the bridge.

As we continued our ramble through the hot sunny valley, steam rose from the boys’ wet clothes. I noticed that shirtless Hari’s ribs stuck out.

"How often do you eat each day?" I asked him.

"Sometimes only once a day."

"What work does your father do?"

"Who looks after you? Who does the cooking and washing while your mum’s away in Jakarta?"

"What about your father?" I asked Dani, who was also undernourished.

We came to a grand mansion in large grounds with neat lawns. Three large station-wagons were parked outside the pillared entrance.

"He was a judge," explained Dani. "He owns the land around here."

A judge would earn about one hundred and fifty pounds sterling a month. But then he might also receive the occasional gift.

"You’ve been useful guides," I said. "Now I’m heading back to Sukabumi for something to eat."

"Smoking?" I asked. Then I realised they wanted cigarettes.

I gave them a few coins.

"Thanks, mister!" they said, taking the money politely and skipping off happily.

Back in Sukabumi I walked around the potholed streets. In the open-air market, women with fat legs squatted beside their piles of sweet potatoes and skinny youths were selling cigarettes from baskets hung around their necks. On a street where the outside walls were black with fungus and mould I found a dark little cafe. I dined on biscuits and cola.
~
Posted by Anon at 11:31 PM