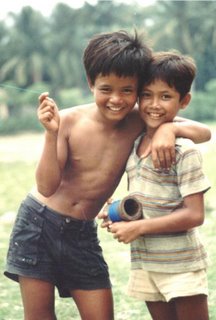 For two days, work and school social events kept me from visiting Min. When I returned to see him I thought he looked pale and sick.

"How’s Min?" I asked Joan, who was sitting in the lounge area. She was dressed in cheap black trousers and T-shirt, and looked fed-up.

"I think Min was worried about you not coming here. He kept on mentioning your name. Yesterday he refused to eat."

This brought a lump to my throat. It was gratifying that Min liked me so much, but, deeply worrying that he couldn’t cope with my short absence. "How is he today?" I asked nervously.

"Are you sure? Min seems a bit white," I said. Min looked like an anguished ghost.

"Has he been feeling sick?"

"There are lumps of dried food on his T-shirt," I pointed out.

"Has the doctor been here this week?"

"Yes. We told him everyone is OK."

At this point Min vomited buckets of white stuff onto the floor.

"Sick," said Min staring at me with big anxious eyes. This was one of his rare comments.

"Yes. I’ll come with you," said Joan. "And can little Tedi come too? He’s been very sick for two weeks."

"Two weeks!" I fumed. "You said everyone was fine! Let’s go immediately." I was still learning about the Third World, and its sometimes odd attitude to truth and accuracy.

We bundled Tedi, a pale, tearful, half-blind, eight-year-old, into the back of my van, along with Min, and drove to the nearby doctor. The clinic was in a modest middle-class house and was modest in terms of equipment and cleanliness. The walls had been long stained by dirty fingers and damp. The shy young female doctor examined Min and issued some pills.

"Nothing serious," said the doctor. "His temperature is normal. Blood pressure’s OK. Just something he’s eaten."

Half blind Tedi was examined next.

"Tedi will need to go to the hospital," said the doctor. "He has a high fever and is dehydrated. It’s urgent that he gets onto a drip."

"I’ll pay for his treatment," I said.

"We’ll have to ask the permission of Ibu Ani," said Joan. "Tedi’s mother lives far away in Central Java. It would take days to contact her."

We got back into the van and drove the short distance to the old, Dutch-style bungalow of Ibu Ani, the elderly lady who had built Wisma Utara for her Down’s Syndrome son. Tedi stayed in my van while the rest of us sat on chairs in the garden. Joan and I explained the situation regarding Tedi, but Ibu Ani didn’t seem keen to discuss the subject. She looked grey and tired.

"How are you liking Jakarta?" Ibu Ani asked me.

"It’s great, but I’m here to ask about Tedi," I pointed out.

"His mother must deal with the problem," said the Ibu, quietly. "That’s the policy."

"But his mother will take days to contact," I said.

"There’s nothing we can do," said Ibu Ani.

"But the doctor says Tedi must get onto a drip immediately. I’ll pay for the treatment."

The arguments were repeated over and over again for thirty minutes until I think I simply wore her down. She agreed to Tedi going to the Pertama hospital.

In the emergency room at the hospital, Tedi was given a blood test, put on a drip and taken to the children’s ward.

"It’s almost certainly Typhoid," said the doctor. "It’s a pity he didn’t come to the hospital a bit sooner. We’ll need to hope no complications set in."