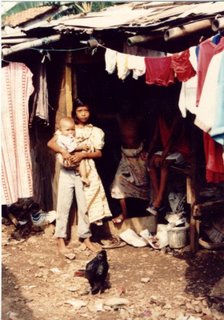 Next evening, Tedi was no worse.

Back at Wisma Utara, Min no longer looked pale and in fact was dancing to pop music when I arrived. Music seemed to make him really happy.

"We’ve sent Min’s photo to a newspaper called Pos Kota," said Joan. "They have a column with photos of lost children. Maybe Min’s family will see it."

"At the end of the week, I’m off to Britain for a ten day holiday," I explained to Joan. "Min won’t understand why I’m not visiting him. Please give him lots of care and attention. Can Dan take him for walks?"

"Dan will take him for walks," said Joan.

"I’ll take Min for a walk now, if I may," I said. "I want to see if Iwan, the boy with leprosy, is back at home. My driver told me yesterday that when he went to the rubbish dump to collect Iwan, to take him to the leprosy hospital, there was nobody there."

Min and I walked through the kampung towards the rubbish dump and after ten minutes had arrived at Iwan’s house. It was locked. There was no sign of life.

"Iwan’s gone to visit relations," said the old woman in the next hut. "He went two days ago."

"His medicine’s finished this week," I said. "Will he be back soon?"

"Do you have the address of the place he’s gone to?"

"Well, my driver will call back here tomorrow," I told her. "In case Iwan’s come back."

It was Saturday. Tedi was making good progress in hospital. Iwan, the leper child, was still not back in Jakarta. Hamid, hopefully, was still with granny in her big house. Andi and Asep and Dian and the others in Bogor had been given money to buy their next lot of medicine. Chong was putting on weight. I said goodbye to Min and set off to the airport for my flight to London.