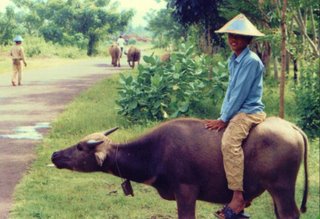 But let me begin at the beginning, back in the year 1990.

It was partly the Robert Louis Stevenson Syndrome which persuaded me to give up a well-paid teaching job at a private school in London and go to live in the faraway city of Jakarta, the capital of Indonesia.

As a child in Scotland I had dreamed of following the path of Robert Louis Stevenson; I had wanted to escape to a tropical land where I could have adventures and mix with the friendly local people.

Stevenson died at the age of 44, having lived for many years abroad. It wasn’t until I reached the age of 45 that I plucked up the courage to move to Indonesia.

And in that wonderful country there were adventures and dilemmas galore.

But why did I choose Indonesia? Well, there was this edition of the National Geographic in which Indonesia looked so strangely, wildly beautiful. It was a land of erect blue volcanoes, exotic mosques, dark tropical skies and beautiful, uninhibited people; it was just the place for a not totally young, unattached chap like me who was tired of London and severely sick of some of his students.

I have taught difficult children both in a slummy Glasgow ghetto and in a wealthy London ghetto; I know that by the time British boys reach puberty, their vices have deepened and their parents have usually divorced, several times.

To teach bolshy Britons, as opposed to respectful Asians, you need an unreasonable amount of stamina and tea. There are, in theory, hours and hours of preparation and each and every lesson you are supposed to enthuse these prickly, gum-chewing, pubescent and prepubescent boys.
Teaching is like appearing live on television seven times a day, with a different script each time. I had fallen out of love with some of my audience (or vice versa), had secret self-doubts, and needed to appear on a different stage. I needed something to cure my neurosis.

There was an advert in the Times Educational Supplement for a teacher of English and Humanities at a school in Jakarta. I would not, under normal circumstances, have thought of applying. There would be hundreds of applicants and they would all be fantastically beautiful twenty-something-year-olds with doctorates from Cambridge. But I was desperate to get out of Britain.

I applied and in some mysterious way I knew I was going to get to Indonesia; it was somehow ordained; maybe it was something to do with the fact that my interview was at 9 am on the ninth day of the month and it was 1990. But I don’t want to appear superstitious.

The interview, in a swanky London club, went well. I had had an expensive haircut and was wearing my Austin Reed suit. The Headmaster, tall, sun-tanned, in his late thirties, showed me pictures of the visit of a princess to his school and I said all the right things about his interests in jogging and art. I got the job. Fantastic!