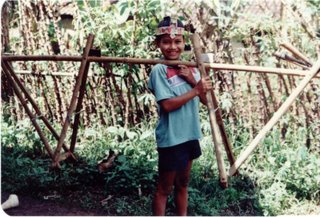 A few days later, having had a phone call from Brother John, I was in the reception area of the Menteng Hospital in Bogor. Supposedly Bogor’s best hospital, the Menteng consisted of a series of simple, single storey buildings in pleasant gardens.

"Do you know how long it took?" said Brother John grinning. "I spent six hours trying to persuade Budi’s family to bring him here to the children’s ward, and here he is!"

"The doctor says he’s severely malnourished and has TB and pneumonia. He says the child must have many weeks of hospital care and that it could take five years to get him restored to good health."

"What do the parents say?"

My heart sank. "What does the doctor say about that?" I asked.

"The doctor said Budi will probably die if he goes home, but he can’t stop the parents doing what they want."

"Let’s go and speak to the parents." I was feeling growing rage.

We walked through an area of garden to the third class children’s ward, a shed-like building which certainly looked third class. There were rows of simple iron beds on each side of the long graceless room. A host of thin-faced female relatives, wearing traditional headscarves and plastic sandals, stood at Budi’s bedside while tiny Budi howled and sobbed.

"Budi must stay in hospital," I said to the mother. I tried not to sound too aggressive.

"He wants to go home," she replied, looking impassively at Budi.

"But the doctor says he may die if he goes home," I continued.

"I’ve got to get home to look after the other children," she said, almost sharply.

"You’ve got other relatives who can help," I pointed out.

"He’s only a child. He doesn’t understand," I said.

"We’re taking Budi home today," she insisted. She bared her teeth as she spoke.

I approached the three extremely young nurses who were gossiping at the other end of the ward.

"Can you help Budi?" I asked. "He keeps on crying. Can you give him something to calm him?" I think that’s what I said, but my grasp of the main Indonesian language was still not great.

The nurses giggled like shop girls and retreated out of the ward.

I turned to Brother John. "Can I speak to the doctor?" I said.

Brother John set off in search of the doctor while I tried to speak to Budi. The child was in no mood for listening to a frightening looking foreigner and shrieked even louder.

"The doctor’s busy," said Brother John, on his return, "but he says he has arranged for Budi to have outpatient treatment twice a week."

"We can’t force them to stay here," said Brother John.

"I’ll arrange for my driver to come here once a week," I said, "to give them money for the outpatient treatment."

On that particular day, the Third World seemed to be a place of ignorance, obstinacy and stupidity. As I was driven back to Jakarta, I wondered if Brother John and I had given in too easily.

4 THE HIGHLAND CITY OF BANDUNG
Minor scrapes on the road to Bandung
Abdul
His father's taken up with another woman
The Savoy
Where can the child stay?
Posted by Anon at 11:41 PM