One of the world's great hot steamy cities 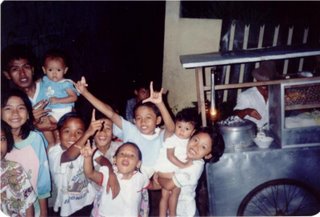 British Airways flew me from London’s outdated and overcrowded Heathrow airport to the wealthy city of Singapore. At Singapore’s clean and efficient Changi airport, I transferred to a Singapore Airlines evening-flight to Indonesia. Jakarta’s Soekarno-Hatta airport proved to be a beautiful modern construction combining gardens with steep Javanese roofs.

I was to be met at Soekarno-Hata by my colleague-to-be Fergus, who had been teaching abroad for most of his twenty year career. Sure enough there he was in the midst of the airport throng, tall and smartly dressed in a Sean Connery way, holding up a piece of card bearing the words: "Welcome Kent."

I had made it across the Indian Ocean. My, these Jumbos are good at getting above air turbulence, most of the time. I was now six degrees south of the Equator and about to begin life in one of the world’s great hot steamy cities.

"Good flight?" asked Fergus, giving me a firm handshake, taking my bag and handing it to his driver to carry.

"I slept a lot," I responded dozily. "Sorry the flight was a little delayed."

"No problem. Just ignore the touts and taxi drivers and we’ll get you to the car park. How do you like the heat?"

It was already dark, but, as we drove to my new home in Fergus’s air-conditioned Kijang, I could see well lit, stylish tower blocks which made it all look so comfortable.

No, wait, there were smaller streets suggesting an East of mysterious dreams and exotic possibilities.

Two dark eyed girls hopped into a battered orange three wheeled taxi; barefoot newsboys plunged into the traffic to sell their wares; men with pirate mouth-coverings hung from the doors of an overcrowded bus.

Under a flyover a homeless family was settling down for the night; at ramshackle wooden stalls teenagers were hawking steaming noodles and hairy fruit; kerosene lanterns were being lit outside a shop selling bottles of weird liquids.

A green and white prayer house was filling up with white-robed figures; pedicabs were being repaired in an oily tumbledown workshop; grinning little boys with sarongs around their waists were enjoying a wrestling match in the grounds of a mosque.