Minor scrapes on the road to Bandung 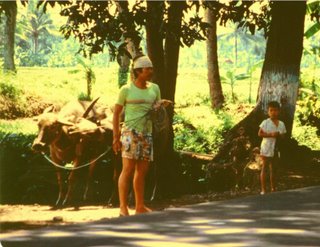 I decided to take a short holiday trip to the highland city of Bandung, Indonesia’s third largest metropolis, which lies 120 miles East of Jakarta. My driver and I motored up over the misty Puncak Pass, with its tea estates, past the rough-hewn town of Cisarua, volcanically active Mount Gede and then the dishevelled town of Cianjur. We moved leisurely on through a world of rice fields, wide muddy rivers and muddy looking children flying kites. As we began once more to climb narrow winding mountain roads I told Mo, the driver, to drive slowly and carefully. I may have had a Sunday-school upbringing, but I have a worrying lack of faith when it comes to cars and anything remotely dangerous. Mo speeded up and on a blind corner, with a precipitous drop below, decided to overtake the lorry in front of us. An enormous truck came speeding round the bend heading towards us.

We tried to squeeze between the two vehicles. There was a loud hooting of horns, a death threatening shout and a scraping sound. We just made it. All three vehicles.

"Stop the vehicle and park!" I commanded.

We parked. I inspected the minor scrapes and then lectured my driver.

"Mo!You’re of a mature age. You’ve got a wife and two children. You normally drive so slowly. Why choose the worst possible place to speed up and then overtake?"

There was no reply. Was he suffering from stress? Had he gone mad? He wasn’t going to enlighten me, but he did drive slowly from that point on. Too slowly.

After a four hour journey we entered the city of Bandung, once known as the Paris of Java. We drove past damp crumbling kampungs, faded colonial villas and modern factories, producing textiles and processed food; nearer the centre there were dark tree-lined boulevards, sinister army barracks, grey concrete shops and office blocks which were tall and of various vintages. We tried to find the Savoy Homann Hotel but Mo had never before driven a vehicle outside of the Jakarta area and he was as clueless as me about Bandung’s one way streets. I was hungry and grumbling. Half an hour passed as we circled the city.

4 THE HIGHLAND CITY OF BANDUNG
Minor scrapes on the road to Bandung
Abdul
His father's taken up with another woman
The Savoy
Where can the child stay?
Posted by Anon at 11:39 PM