His father's taken up with another woman 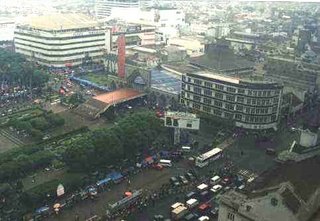 In a green walled surgery, I introduced myself to the doctor, a thin Chinese Indonesian woman with a kindly face. I explained how I had found the child. Abdul’s ear was carefully washed and several types of pill were issued. The doctor asked the boy a few questions and then turned to me.

"He says he’s been abandoned by his parents," she said. "His ear will be OK, and his cough."

"Is there somewhere I can take him?" I asked. "He shouldn’t sleep on a bridge with the rain pouring down."

"I’ll give you the address of my church. You can talk to the pastor. He may be able to help."

By taxi we reached the church, which was in a ritzy neighbourhood. A fat uniformed guard, wearing an angry sneer, barred the door.

"He can’t come in," said the guard, referring to the shivering eight year old Moslem boy.

The guard lifted his arm as if to push the boy away. At the same moment, a middle aged Chinese woman, who had spent a fortune on her coiffure, came out of the church, staring at the child as if he was a gob of phlegm. The guard was distracted and we slipped inside the church.

We located pastor Simon, a big Dutchman with a twinkle in his eye, and sat down for a chat, in his comfortable wood panelled office. Pastor Simon asked Abdul lots of questions, which were answered by the boy in a trembling voice, as the tears flowed down his grubby little face.

"His parents have divorced," said the pastor, addressing me. "His mother’s gone off to some unknown address in Jakarta; his father’s taken up with another woman; he was being looked after by his grandmother but she beat him. That’s why he ended up sleeping in the central square in Bandung."

"How does he survive?" I asked.

"These children in the square, and there must be several dozen there, can earn up to a dollar a day. They do some begging and they shine shoes. On a good day there’s enough money to buy food at a stall and play the arcade games. But this little chap got sick."

"There’s little anyone can do. They enjoy the street life. It gives them freedom. They don’t want the discipline of home or school." Pastor Simon smiled cynically. Here he was, the Christian Pastor in the wealthy church, apparently writing these people off.

"Isn’t there a home for such children? Doesn’t Bandung have some institution that’ll take them in?"

"You could try Lembang, up in the hills, above Bandung. There’s an international children’s village there. It takes abandoned children." Pastor Simon wrote down the address, shook hands, and showed us to the door.

We left the church, still hungry, and found a three wheeled bicycle taxi to take us to a clothing shop. I was enjoying myself; I was having an adventure; and in a smug sort of way I felt I was behaving better than the average mortal.

4 THE HIGHLAND CITY OF BANDUNG
Minor scrapes on the road to Bandung
Abdul
His father's taken up with another woman
The Savoy
Where can the child stay?
Posted by Anon at 11:37 PM