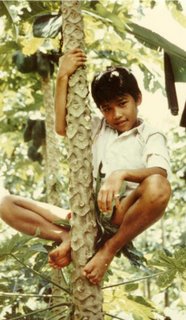 On a sunny Saturday morning, one week later, I returned to Budi’s house to find him looking even more sick and fragile. I asked his mother if she had taken him to the doctor. No, she had not. But I noticed she had what appeared to be a new set of earrings, and the other children in the family, who looked healthy enough, had some cheap toys which also appeared to be new. I was angry and let it show.

I seemed like the pushy, know-all, foreigner treating the locals as inferiors. But I felt justified in my aggressiveness; Budi looked dangerously ill; his parents seemed pretty ignorant and needed help; I came from a culture where we had learnt that doctors could help children. Also, I’m sorry to say, I had got used to ordering around my driver and maid, and having doors opened for me at the Hilton.

Mother, father and sick child were persuaded to get into my vehicle and off we drove, a short distance, to a clinic.

It was a dirty little concrete house with cobwebbed walls and virtually no furniture. The sullen young man, who claimed to be a doctor, gave Budi a brief examination and muttered something to the parents. I was being ignored.

"What’s wrong with the child?" I asked.

That seemed to be the end of the conversation. I wondered if the doctor was going to write out a prescription or make some recommendation about further treatment, but he remained silent. I guessed that he hated his country-clinic work and would rather have been doing something in a comfortable part of Jakarta.

"Should the child go to hospital?" I asked.

I waited for him to say something else. More sunless silence

"Will the parents agree to the child going to hospital?" I persisted.

The doctor spoke to the parents and then said, "They don’t want to go to the hospital."

"Can you persuade them?" I urged.

"They don’t want to go," repeated the doctor, in a tone of voice that signalled he’d be happy to see me leave immediately and never return.

"Should the child get some medicine now?" I asked.

The doctor shook his head and we retreated outside.

"You must take the child to the hospital," I said to Budi’s father.

I appealed to my driver to see if he could persuade the parents to see sense and he had a brief word with them.

"Nothing doing," said the driver.

It seemed that the locals would smile, and be polite, and put up with all sorts of indignities. But when they dug their heels in, they dug them in hard. I needed some advice and resolved to speak to my colleague Carmen whom I was due to meet for lunch the following day.