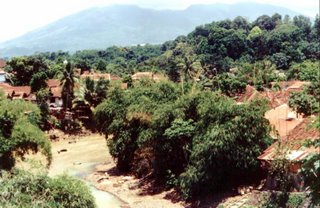 The new term began and I found everyone at the school, myself included, full of boundless energy and smiling enthusiasm. The school was housed in a large red-roofed mansion to which various annexes had been added. There was an open-air swimming pool and gardens coloured by oleander, orchid trees and peacock flowers. The school day was pleasantly short, which allowed me time in the afternoons to prepare lessons and go shopping. I now had an eight-seater Mitsubishi van and a small, thin, middle-aged driver called Mo, a man of few words.

And at weekends there was the Javanese countryside to explore.

"Take me to Bogor," would be my usual command to Mo on a Saturday morning.

Bogor, an hour’s drive from Jakarta, is nulli secundus, second to none. This moist, hillocky, and handsomely shaped little city lies languorously beneath a steep sided volcano, Mount Salak, and is crossed by rivers and canals on either side of which stretch miles of red tiled residences, and gardens overflowing with bougainvillea, hibiscus and jasmine. It could be Southern Europe in the nineteenth century: down a half-seen alley a veiled woman is hanging flimsy garments on a washing-line; fresh young ginger on a kaki lima cart is squeezed to extract its fragrant juice; in a half-hidden cul-de-sac goats nuzzle the haunches of slender kids; gorgeous cocks strut and crow in the backyard of an old Dutch house; schoolgirls in white uniforms walk arm in arm past the deer park and Palladian palace; blue and magenta kites soar high above the scarlet flame trees; in a deep gorge naked boys splash and tumble in the river; birds in gilded cages sing their siren song.

Bogor is full of little districts, or kampungs, which are free of road traffic and full of gossiping housewives, street vendors and hordes of grinning children. At first I was nervous of invading people’s privacy and kept to the main highways. But then I discovered that if I explored the narrower alleys and stared into people’s houses people didn’t seem to mind the intrusion. Maybe they were too polite to object; maybe they hoped I would give them money; maybe they were intrigued by the presence of a funny foreigner; probably in the crowded little neighbourhoods life tended to be communal and there was little expectation of privacy. As in many Third world countries, the children were not shy about following you down the street and beginning a conversation.