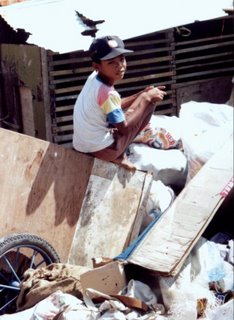 On the outside, the disco looked sort of cheap and seedy, with lots of corrugated iron and no sign of any windows. An unsmiling old Chinese woman took our money, only a few rupiahs, and we entered a long, poorly lit room with some plain tables and chairs, and some space to dance. The clientele seemed to be exclusively teenagers and the music was the very latest. It could have been a scout hut in England, but there was a glittery, neon-lit bar, and the predominant colour in the room was black. We ordered large beers and took a seat.

"Is it safe here?" I asked. Something made me feel uneasy; maybe it was because we were near the docks where I imagined there were bound to be hoodlums and cut-throats; maybe it was the fact that we were the only foreigners.

Carmen took my arm and said, "See the smartly dressed gent near the door? He’s army. This place has military connections so it should be safe. The management’s Chinese, as always."

"We wouldn’t have got in there. An expat friend’s married to a high up British policeman who advises the local traffic police. He was taken to the place next door by an Indonesian police colonel. Topless girls. We definitely wouldn’t have got in. That sort of thing, topless girls, is very illegal. You have to be well connected."

"The girls here all look Chinese," explained Fergus. "They’ve got Chinese eyes and light skin and they’re expensively dressed. But some of the boys are indigenous Indonesians. They’ve got light chocolate skin like southern Italians and their eyes are different."

"Do you two frequent places like this?" I asked. Fergus, consumer of tinned tuna and American beef burgers, didn’t seem like the sort of person to go ethnic. And I couldn’t imagine Carmen, a woman devoid of make-up or frills, as a night-owl.

"And so is Fergus," said Carmen. "Although he might be seen occasionally in the Sportsman’s."

"The boys seem to be dancing with the boys and the girls with the girls," I noted. "Do the races mix?"

"The Chinese don’t own everything," said Fergus. "It gets exaggerated."

"You’re right," said Carmen. "Some people also hate the Javanese because they’re the big bosses politically. In some parts of Indonesia there are wars between villages or kampungs on a regular basis, but it doesn’t get into the papers. People tend to live in tribal groups."

"Suharto and the army keep a tight grip," said Carmen. "The army’s everywhere; it’s in every village; it’s in local government; in the cabinet; in the parliament; in the civil service; in the universities; in business. They run lots of businesses. Businesses of every sort. The army won’t want to lose its wealth and power."

"They say the army’s got few soldiers and little money," I said.

"The army’s got about one and a half million para-militaries as helpers," said Carmen. "Then their businesses provide most of their money."

"I visited a police state once," I said, "and couldn’t see any policemen. It all seemed jolly friendly. That was Baby Doc’s Port Au Prince."

"And they’ve buried the half million or so murdered in ‘65," said Fergus. "They don’t talk about it."

What’s the music?" I asked, changing the subject.

"They’ve started playing dangdut," said Fergus, who got up and seemed to be moving to the dance floor where some of the teenagers had begun moving their arms and hips in slow, sensuous movements. In fact Fergus went straight to the toilet.

2. NIGHT AND DAY
Gamesman's Bar
Pop Gun
The Bintang Disco
The Ranamok and the J Bar Bogor
Posted by Anon at 11:49 PM