Asep and a wedding 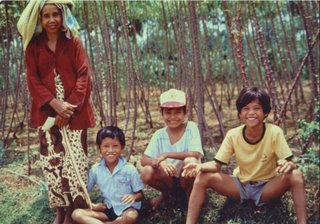 Back at Budi’s house a small crowd of ragged children had gathered to await our return. Seated next to this brood was a pale spindle-shanked man in his thirties, who looked too tired to stand up.

"Where do you live?" I asked the cadaverous chap.

"Near here. Along that path across the road."

At a funeral pace we walked alongside some fields of rice and tapioca until we came to trees and a small settlement of mouldering shacks. Asep’s earth floor house was in a damp shady hollow. Outside the house stood a shoeless and shirtless small boy with a swollen stomach and a slightly older girl with a sweet and innocent face.

"Do you work around here?" I inquired.

"Would you like to get an x-ray at the hospital?"

"OK. Here’s some money. I’ll come back for the receipt next week. There’s enough there for medicine too, and some food.

There seemed something too passive, too submissive, and too docile in Asep’s body language. He did not seem like someone who would fight his illness. I hoped Budi was not the same.

I set off back through the trees.

"Hey mister!" said a ragged little boy standing next to some goats. "There’s a wedding. Come and join us!"

"That’s kind," I responded, and followed him to a cheerless hovel, outside which stood two old men and a table bearing two plates of meagre little grey coloured snacks. There was a strong smell of animal dung.

I was led into the two room house and briefly presented to the bride and groom, who were enthroned on gold painted chairs and dressed to look like figures from a Hindu epic. He looked pale and she looked sad. Back outside an old man handed me some rancid looking crisps, which I managed to make disappear into my pocket.