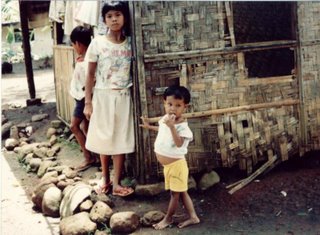 While wandering along the tree-lined banks of the River Cisadane in Bogor, enjoying the perfumed tropical air and the cheerful grins of passing schoolchildren, I encountered a crinkled old woman with the sweetest of smiles. The woman was holding a wooden pole, suspended from which was a spooky looking fruit bat, as big as a poodle. With its wings stretched out, the bat looked bigger than the woman.

"Is it your pet?" I asked. On closer observation, the winged creature had a cute face like a sheep dog.

"Do you live here?" I pointed behind her to the simple little white-walled, red roofed house, which was part of a terrace clinging to a steep slope.

"You’re quite high above the river. Wonderful view of the rice fields and the volcano."

"Come into our house," called out a pretty girl appearing at the bright green door of one of the houses.

I climbed some stone steps, squeezed into the tiny front room and sat on a wooden chair next to a sewing machine. Melati, who was wearing white cycling shorts, stretched out on the torn settee, next to her young brother. Above their heads was a picture of a mosque. Granny stood with the fruit bat at the open door.

"I want to practise my English," said Melati, in Indonesian. "Can you help me?"

I switched to English. "You go to school in Bogor?" I said.

I decided to continue in Bahasa Indonesia. "Who is this next to you?" I said.

"What’s this?" Melati asked in Indonesian, while pointing to her head.

"Head," I said in English. She didn’t repeat the word.

"What’s this?" She pointed to her arm.

"Leg," I said. Young brother was having a fit of the giggles and I thought it was time to change direction.

"What is this?" I said, pointing to the settee.

A good looking woman in her mid-thirties had appeared at the door and was standing next to granny.

"My mother," said Melati, seeing me looking in the direction of the newcomer. The mum smiled warmly and nodded in my direction.

"Mister, where are you from?" asked the boy.

"Ursa Major," I said. The lad looked puzzled and perhaps a little worried.

"Do you have a wife?" asked Melati.

This time they all grinned.

"I’d like to come to England," said Melati. "How long does it take to get there?"

"Wahai! Is it near America?"

The conversation rambled on for some minutes. Then I noticed that the Mother was no longer smiling; no longer looking in my direction. I sensed this was a signal that it was time for me to go.

"I have to get some shopping done," I explained.

"Can I come with you?" asked Melati.

I looked at the mother but she was staring at the wall.

"Sorry, that’s not possible," I said.

I always loved being invited into the homes of ordinary Indonesians. I loved the fact that they dropped whatever they were doing in order to make me feel welcome. I loved their warm smiles and normally relaxed body language. I loved their relatively uninhibited chatter. But, I had come to realise that there was a moment in any visit when someone would signal that it was time for me to go; they had work to get on with; it was time to feed the baby; they were getting bored; or mum had bad vibes. The signal might be a frown or a yawn or a remark such as: "What time is it?" Often the signal would come after only a short visit. In any case there was a limit to how many things we could chat about. My Indonesian vocabulary was too limited for discussions of anything other than the relatively trivial. Politics was out because they didn’t feel free to criticise their government. And although these people were earthy and flirtatious, there were sometimes limits to what the community would allow by way of risky repartee. They had their taboos.