What would Bangbang's parents say? 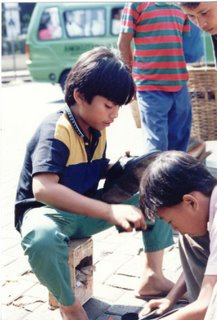 When I returned to the hospital the following evening, I found Bangbang strolling along one of the corridors, on his own. I took him by the hand and returned him to his ward.

"I found Bangbang wandering around the hospital," I said to Fatma, the nurse in charge. "He should be kept in the ward. He might try to run off."

Fatma and her assistant seemed unconcerned. They continued watching the TV in their little office.

Next evening I returned to the Dipo Hospital to find Fatma and her friend busy eating chicken stew. There were no patients to look after.

"The hospital guards looked all over. He’s gone." They carried on eating, picking up bits of chicken in their fingers.

"All you do is sit in your office and eat and watch TV," I said. "You only have one child to look after and you manage to lose him!"

They smiled, refusing to be unfazed.

"I’m going to see the hospital’s director," I announced, hoarsely. I wanted someone to take the blame and I didn’t want it to be me.

I strode along corridors and up flights of stairs until I came to a grand hallway and the offices of the hospital’s top people. The Director of the Dipo Hospital had an office that reminded me of a ballroom at a Grand Hyatt. But it was empty, as was the office of the deputy.

"When will they be back?" I asked a secretary, seated at a desk in the hallway.

"Next month," she said. "They’ve both gone on the Haj pilgrimage."

There was no one at the hospital on whom I could vent my rage.

When I got home, I noticed that Rachmat, the house guard and gardener, had not cut the grass in the front garden and Ami, the maid, was not ready to serve supper.

A grining Rachmat poked his head around the kitchen door.

"Rachmat, the grass should have been cut days ago. Get it cut first thing tomorrow!" I found myself speaking like a colonial master.

"Ami, why is supper not ready? This is ridiculous." As I spoke, the roast chicken was rushed onto the dining room table.

I sank my knife into the chicken breast. Red blood oozed out.

"Ami! This chicken is not properly cooked. This is useless."

I had noticed, when I had first arrived in Jakarta, that certain expats addressed almost all Indonesians as if they were stupid ten year-olds. It was too easy to do. People like Ami and Rachmat did occasionally behave in a slightly sloppy way; and when they were told off they seemed to put up with it.