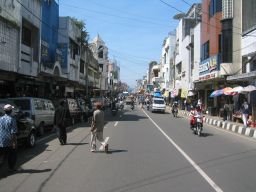 Next evening, when I returned, there was no sign of them. I walked around the block and asked a stallholder, "Have you seen the boy with one hand?"

"They’ve gone to the canal to wash some clothes." I grew angry at having to wait.

Around seven o’clock a woman appeared carrying a baby and far behind trailed One Hand, trouserless and shoeless.

I met up with them and said, "I’ve been waiting one hour! Where are One Hand’s trousers? I bought some only yesterday."

"They’re being washed," said the mum.

"But the poor kid’s going around with no trousers and no shoes. And he has no hair!"

She didn’t reply. I wondered if she had sold the clothing.

Mo gave me a disgruntled look as he and I drove off to the Meridien Hotel.


My next sighting of One Hand, his mum and the baby came a few days later when I was again in the vicinity of Pasar Baru. They were seated at the roadside, and One Hand was trouserless and shoeless.

"Things haven’t changed, have they," I said to One Hand’s mum.

"I want to go on the transmigration programme," she said.

"You mean go off to an outer island and cultivate a plot of malaria infested land in a region with poor soil and too much rain?" That’s roughly what I tried to say in Indonesian. The government’s controversial transmigration programme was aimed at reducing over-population on islands like Java by moving volunteers to the less crowded, outer islands. The transmigrants were given small plots of land and a little help with getting started.

"You want to go to an area which may not want to be invaded by Javanese like you?"

"Apa?" She didn’t seem to be getting my drift.

"You want a fresh start?" I asked in Indonesian.

"Yes, I want to go back to Sukabumi, but we need money for that."

"Sukabumi’s here on Java, near Bandung," I said. "You don’t want to go on the transmigration programme?"

"I want to go back to my family in Sukabumi," she insisted.

"How much money do you need?"

"If I give you the money will you use it properly?"

I gave her what she had asked for and returned to my van, from which Mo had been watching the proceedings. I was again in the Christmas mood. Two hundred thousand rupiahs was the equivalent of about one hundred American dollars.

"You gave her money?" said Mo, as he started up the engine.

"Yes. She hopes to go back to Sukabumi."

"You shouldn’t give these people anything!" said Mo, sounding bitter. "They are beggars. You should have reported them to the police. The police have places for such people."

Mo continued, "I’ve had to work hard all my life. My parents were poor. I had to work to pay for my education. That woman doesn’t work. She doesn’t deserve help."

For some reason this reminded me of an occasion in India when a middle class citizen of Bombay had said to me, as we drove past some pig-sty slums, "Filthy animals, these people!" Come to think of it, he had also pointed to some children who had had limbs chopped off to make them better beggars. Goodness! I hoped that was not what had happened to One Hand.

I invited Mo to join me for a meal in a cafe. We collected our plates of nasi goreng at a counter, I sat down at a table near the window and Mo went off to a table near the kitchens. I asked him if he wanted to join me but he said he preferred to sit separately. I suppose he may have been a bit shy, or maybe he hadn’t forgiven me for telling him off about his reckless driving at a certain point during our trip to Bandung.

I never saw One Hand again. Perhaps they really did go back to Sukabumi. That was better than begging on the streets of Jakarta.

But I missed the little kid.