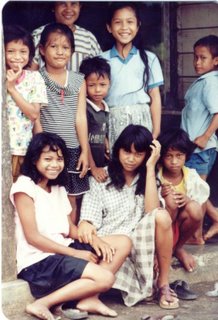 I couldn’t get Ujang out of my mind. Travelling into work next morning I wondered what would happen if I had to leave Indonesia? Would I always be able to pay the clinic for his keep? If I left Indonesia he wouldn’t have any visitors. Would he shrivel up and die of loneliness? I could imagine him in later years, sitting alone in a corner, staring into space, wondering what had happened, and why he had been deserted.

Over a cup of grotty coffee in the staff room, I spoke to Ian, who already knew the basics about Ujang. "Do you think Ujang will ever find his family?" I asked.

"Not a chance," said Ian, a keep-fit fanatic, bachelor and lover of nightclubs. He was the sort who would never give money to beggars, although I have to say he did have a soft spot for dogs.

"I felt so sorry for Ujang when I found him in the street," I said.

"He’d be better off in the street," said Ian.

"Some kids would be, but this one was different," I pointed out. "He wasn’t coping."

"Sometimes these people get violent when they’re older. You’ll need to watch out," continued Ian, frowning.

"Amanda, what do you think?" I asked.

"You’re taking an awful risk, taking a child off the streets," she said. "You could be in trouble with the police, the immigration authorities and goodness knows who else." Plainly dressed, unmarried, middle aged Amanda, a born administrator, was not the sort to mix with the locals or do anything unorthodox.

"Rubbish," said Fergus, looking up from his book, "The police couldn’t care less. If he’s a mentally backward street child, then officially he doesn’t exist. He’s better off in the private clinic. He wouldn’t make many friends on the streets of this city!"

"I don’t know about that," said Carmen. "I came across a mentally backward woman living on the street. Her hair was neatly cut, her clothes were clean and she was not malnourished. Some of the kampung people must have been helping her."

"Now that I come to think about," I said "Ujang’s hair was quite short and must have been cut quite recently."

"Watch he doesn’t get dependent on you," said Carmen. "He’d be awfully upset if you had to leave Jakarta. Another thing to watch: if you show favouritism to a child in an institution, the staff may take it out on the child when your back’s turned. They can be jealous."

"Surely not," I said. "Would professional staff do that?"

"Talking of primitive emotions," said Fergus, "I heard that that massacre in the Dili churchyard was planned in advance."

"Yes," said Fergus. "They say the burial trenches were dug by the army before the massacre."

"Don’t forget the Amritsar Massacre," said Carmen. "And Bloody Sunday, and the Australians hunting down Aborigines like wild animals."

"Well," explained Carmen, "that was unarmed Indians being mown down by a British general."

"I wonder if the Dili massacre will affect arms sales from Britain," said Ian.

"No chance," said Carmen, guffawing and almost spilling her coffee.