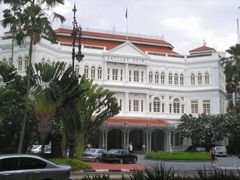 When the summer holidays began I decided to take a short flight North to the tropical island of Singapore, ruled at one time by Sumatrans, at another by Indians, and then in more recent times by the British, and even the Japanese. Three quarters of Singapore’s population are Chinese who came to Singapore as labourers in the 19th and early 20th century. The rest of the population are mainly of the Malay and Indian race.

Singapore was, fairly recently, a grubby Third World country with a bit of a reputation for poverty, racial problems and crime. Now part of its fame is due to its great wealth and incredibly safe, clean streets. In Singapore, unlike in so many towns and cities in Britain, you will not see filthy run-down housing estates, you will not normally see litter or graffiti, you will not see drug dealers at street corners, and you will not see knife-wielding teenagers mugging old ladies. There is censorship of nasty videos and zero tolerance of crime. Drug dealers are likely to be executed.

I took a taxi from Singapore’s Changi Airport and studied the scene. At first it was fast traffic, concrete motorway, concrete tower blocks, and neat patches of tropical garden and park. But then we slowed as we entered the heart of the hot, humid city. Slim brown school girls in white uniforms were walking sedately past green shuttered colonial buildings; in the shade of a cool veranda a thin pussy cat stretched itself and fell asleep; glistening Mercedes glid past villas with palladian pillars and gardens of ferns and palms; turbaned Malays were heading towards a mosque; incense drifted upwards from a Hindu temple.

Wonderful; but was there something missing? Some colourful graffiti or a cow crossing the road? To be honest, since Singapore gained its independence, too many of the colourful old buildings have been knocked down, to be replaced by modern skyscrapers. And some unkind people have described Singapore as being a police state, where eccentricity and non-conformity have been outlawed.

Lee Kuan Yew, while prime minister of Singapore until 1990, seemed to believe in the idea of a nanny-state run by an elite; he did not entirely trust American capitalism; he supported the ideas of Confucius.

"How’s life in Singapore?" I asked the Malay taxi driver.

"Housing’s expensive. It’s hard to pay all the bills."

"Singapore’s doing pretty well though, isn’t it? Compared to Indonesia."

"You have to work hard here because everything costs so much. All work, no play."

"It must be a good place to bring up children. The streets are safe."

"Yes, it’s safer than most places."

"No dengue fever. No malaria."

"You can get these here occasionally. There was dengue quite recently."

"There are at least four. Want to go there?"

"No thanks." I had heard that the red-light areas were tame and strictly controlled.

I checked into a Malay-run four star hotel and was not wonderfully impressed. A large overflowing rubbish bin almost blocked the emergency stairs. Staff seemed sullen. Never mind, I would eat outside.

At a cheap hawker food stall I feasted on Malay chicken broth and an assortment of meat and vegetable dishes flavoured with shallots, prawn paste, lemon grass and tamarind.

I wandered happily through Chinatown taking photos of washing hanging from bamboo poles, tall crowded tenements, dusty old shophouses with ferns growing out of their tin roofs, and bald headed men sipping green tea and playing mahjong in high ceilinged restaurants. I stopped for a beer.

"Tourist?" said the young Chinese chap standing next to me. He was wearing a sober tie and looked like a businessman.

"Yes. I work in Indonesia."

"Be careful with the Malay race. They are the majority in Indonesia, you know, and the minority here."

"Why the need to be careful?"

"They’ll be very friendly and invite you into their homes, but they’re expecting gifts. They’ll take more than they’ll give."

"Interesting." I decided not to argue with him. I was on holiday. "Singapore’s doing very well," I commented.

"I think we are now richer than Britain," he said. "In terms of people’s incomes."

"Why do you think you’ve done so well? This place used to be Third World. Just a muddy swamp."

He smiled, looking very pleased. "Where you have the Chinese people," he said, "and you have honest British-style institutions, like in Hong Kong and here in Singapore, then you get wealth."

"Why is Indonesia not so rich?" I asked. "It’s got millions of Chinese Indonesians."

"No honest institutions in Indonesia," he said. "The Chinese businessmen get away with murder."