The Samudra Beach Hotel and a warung 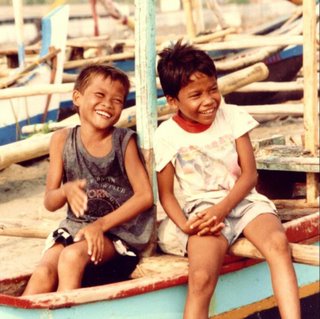 She was right. After Cibadak the road became narrow, pot holed and twisting. Mo, my driver, had to concentrate hard while I was able to sit back and enjoy the scenery. We entered a wild and magical world of goblin hills, impoverished wooden huts and towering phthalo green rainforest. Occasionally there were sunny terraced rice fields, followed by dark and gloomy rubber plantations.

After a bumpy four hour journey the Indian Ocean came into view. The driver and I began our descent towards Pelabuhan Ratu and a giant glistening bay which was edged by forest-covered hills, abrupt cliffs, wide beaches and tall palms.

We drove past little fishing boats, with red and blue sails flapping in the breeze, and past tousled wooden houses decked in pink and peach bougainvillea, and on to the concrete box hotel built by President Sukarno in the 1960’s.

The hotel seemed to have only a handful of guests. My room looked as if it had not been redecorated since the 1960’s but at least there was air-conditioning and a shower. I could not feel the presence of any goddess.

I headed for the dimly-lit bar and ordered a glass of wine. I was the only customer. What appeared, after a ten minute wait, was a glass of something from a bottle which had probably first been opened back in 1960.

"The wine’s gone off," I told the bright-eyed young barman who looked as if he could have been a student.

"I’m sorry," he said, flashing me a smile. "Not many people ask for wine. Would you like a beer?"

"Yes please. The hotel seems a bit run down."

"It has been renovated," said the barman, putting on a serious face, and pouring me a Bintan.

"Not very well," I commented. "The fittings such as baths and air conditioners look thirty years old. And the schools I passed on the way here. They all look as if they’re falling down."

"What this country needs is a revolution." The barman seemed to be smiling as he said this. I wondered if he came from a simple house with no bathroom, or if he was one of the well-connected.

"That’s a dangerous thing to say," I pointed out.

"I prefer peaceful change," I said, in case anyone else was listening. "The trouble with revolutions is that the little people get killed."

I wondered, half seriously, if the barman was an agent provocateur, and decided it might be a good idea to go for a walk along the deserted beach.

My stroll took me to a collection of dilapidated little warungs, or stalls, next to some palm trees. Each simple wooden building acted as both bar and home. I chose the only stall where there was any sign of life and sat drinking a cola in the company of the owner, moustachioed middle-aged Rachman. From my bar stool I could watch the waves breaking on the sunny shore.

Rachman told me he had four children. Mira, a pretty girl in her late teens, was standing at the far end of the bar; she was combing her long dark hair. Budi and Udin, two little twins with eczema on their legs, were playing with a skinny dog. Abi, a winsome boy, aged about twelve, was using a broom to sweep a patch of earth in front of a shed containing chickens. The boy was limping and did not look happy.

Abi, hearing our coversation, came over to the bar.

"I’ve got a fever and a headache," said Abi.

"Do you want me to take him to the local hospital?" I asked Rachman.

"That would be kind," he said.

"I think the hospital will need to have you there in case they want to give him an injection or something."

"But he’s only about twelve years old."

Abi and I drove to the little hospital near the centre of town and consulted the doctor, who looked as if he was not long out of school.

"It’s polio," said the doctor. "Very common here because of the faeces in the sea water. Abi will be better soon if he looks after himself. This looks like a fairly mild case. But it was good you brought him here."

"I’m glad it’s not serious," I said. "Are there lots of serious diseases around here?"

"The south coast has malaria. Then there’s typhoid all year round, and TB, and hepatitis, and we suspect there’s a growing AIDS problem."

"I’ve seen a few people with skin diseases," I commented.

"Most of them have skin problems."