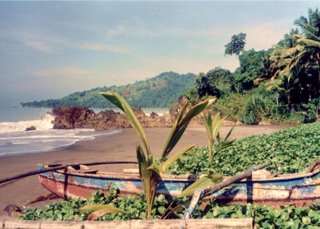 I spent much of the next day exploring the beautiful coastline, breathing the sea air and taking pictures of gorgeous little fishing boats in the turquoise sea. Each time a catamaran approached the beach, hordes of small boys would wade into the sea to unload long silvery fish.

Wherever I wandered, I was met with friendly faces. Outside some fishermen’s huts a small boy inched up a tall coconut tree, released a coconut, slid down to the ground, hacked off the tip of the nut with a machete, and offered me a drink of sweet refreshing liquid. Then he and his friends brought me a young goat to inspect.

I stopped off at the main market, which comprised a series of dark, low-ceilinged warehouse-like buildings linked by muddy pathways. Black shiny flies covered the chicken innards laid out on a blood-covered table; open sacks of everything from coriander to ginger gave off the aromas of the East; sensuous dangdut music flowed from stalls selling cassettes.

In the evening I returned to the warung to see Abi.

"He’s fine. Getting lots of rest."

"No. We get lots of young Indonesians coming to the beach at holiday periods but they’ve no money. I need to restock the warung, but I can’t afford it. My daughter is studying in Bandung but it’s a struggle to pay the fees."

"How much do you need to restock?"

I counted out a few rupiah notes and handed them to Rachman.

"You’re very kind to us," said Rachman’s plump, soft-hearted-looking wife, who had appeared from inside the hut.

"Sorry, I don’t understand what you’re saying," I lied. "I’ve got to go back to the hotel to get my packing done. Going home tomorrow." Somehow their words had disturbed the pleasant atmosphere.

"Are you driving back to the Samudra Beach?" asked Rachman.

"Be careful around here," said Rachman. "Last week there was a woman tourist found dead next one of these huts."

"Goodness. What happened? Was she old?"

"She was young. The police don’t know what happened. No sign of violence."

I walked very carefully back to the hotel, glancing behind me from time to time. I was beginning to feel bad vibes. Would I have wanted to get close to any of Rachman’s family? There was a photo in their warung showing the daughter with a boyfriend. Then there was the question of what the hospital doctor had said about local diseases. And there was a question of my karma.