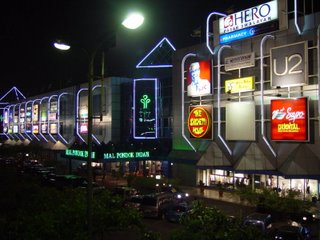 Photo of a Jakarta Mall by Jonathan McIntosh. http://commons.wikimedia.org/wiki/User:Thehero
That evening brought another visit to Ujang and a chance to talk to Dr. Joseph.

"We’ve discovered his name," the doctor replied, in his usual mellow, relaxed way. "Ujang whispered it to me this morning. He’s called Min. It rhymes with lean or seen."

Min was also feeling mellow, as he had his feet up on the doctor’s desk; obviously Dr Joseph had the knack of putting his patients at their ease.

I was feeling tense, but very happy that Min had broken his silence. We now knew he could speak!

"Very little. Min seems to have extremely limited speech," continued the doctor. "That could be because of mental backwardness."

"Has he said anything about his family? His address?" I asked.

"Not yet. I don’t think he has the mental ability to understand a concept like ‘address’. He hasn’t mentioned any family."

"Do you think we’ll find his family?"

"He still seems a bit dazed or even drunk," I said. "He shakes a lot. Could you reduce the strength of the drugs you’re giving him?"

"Yes, later we’ll reduce the strength. The drugs are to keep him peaceful and bring him out of his depression."

"Can I take Min out for a trip to the shops?"

We returned to the fast food restaurant and bought great big ice cream cones. Min grinned wickedly, licked his vanilla ice, and then swiftly jabbed it against my face. He shrieked like a happy two year old. Well, it was progress of a sort. I wiped my face clean, paid the bill to a bemused girl, and returned to the clinic. I didn’t mind getting a little taste of his food as long as he was happy. In earlier days I would never have imagined that an apparently mentally backward child could play an important role in my life; Min had filled a gap.