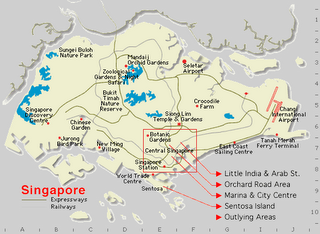 Back in Singapore that evening, I took a clean and comfortable bus out to a housing estate near Jurong. The houses looked shapely and colourful and a zillion times better than the spare little concrete sheds lived in by workers in Jakarta. Gardens were well tended and there was no graffiti or litter. (Some of the older housing estates in Singapore are boring shoe-boxes.)

"Nice houses," I said to a Malay shopkeeper with a big stomach and funny little hat.

"That’s true," he said, looking a little suspicious, or even grumpy.

"Is it easy for Malay Singaporeans to get into business?"

"A lot of the top people are Chinese?" I said.

"It’s changing," he explained, relaxing a little and looking proud. "My second son goes to university. A good boy. We now have Malay accountants and lawyers."

"Your other children?" I asked in the Indonesian language, which is borrowed from Malay.

"My first son is a taxi driver," he said in Malay, grinning. "My third son’s a bit of a problem. He just drives around on his motorbike." He laughed, perhaps to show he wasn’t worried.

"Do you miss living in a kampung?"

"What?" He looked as if he hadn’t understood.

"Is it good living in one of the old Malay housing areas? With the little wooden houses?"

"It’s relaxed in the kampung. You can sit with your friends and watch the fishing boats or the children playing. No worries."

"Sounds nice. Got a big family?"

"Where my brother lives, in the kampung in Ponggol, we have lots of uncles and aunts, grandparents, cousins, nephews, nieces. We’re never lonely there. Everyone looks after everyone else."

"What about the new housing estates?"

"Some of the people in the new apartments never meet their neighbours. They’re working in an office or watching TV."


I decided that Singapore was a safe place, for the person who towed the line. It was a good place to bring up children. And it was not as dull and conformist as I had been led to believe. Yet, I was somehow pleased when I got back to Jakarta, with all its eccentricities and extremes. I felt that it was in Jakarta that I was more likely to find my soul-mate.