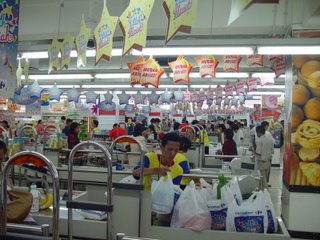 Photo of a Jakarta mall by Jonathan McIntosh
http://commons.wikimedia.org/wiki/User:Thehero
When Ujang and I arrived at Golden Truly supermarket, Ujang was swaying slightly and looking heavily doped. I took a trolley, persuaded Ujang to sit inside it, and wheeled him around. Great fun for me, and there just the hint of happiness on Ujang’s face. We picked up some milk and some papaya. What was upstairs? We came to the escalator.

Ujang stepped on and I followed, clutching two plastic bags with my right hand and the escalator rail with my left hand. We moved up rather fast. Ujang, who had not been holding on to the rail, began to fall backwards.

I let go of the rail and tried to support Ujang’s back which was moving swiftly towards my nose. I began to fall backwards and imagined collision with the spiky metal bits of the escalator and a nasty swift descent head first.

The woman behind me involuntarily provided temporary support for both me and Ujang. She was a big strong woman.

Balance was restored, my heart thumped, and I fastened Ujang’s cold little hand on to the rubber rail. Crisis over. I had discovered that the kid was new to escalators.

I needed a drink and that meant a trip to a fast food restaurant. In a place selling fried chicken, Ujang and I sat on bright yellow chairs, next to green and red plastic flowers, and I ordered two colas.

Ujang gulped his down and then, deciding to have a pee, stood up abruptly, and moved over to a plastic tree, beside which he squatted down . As he was about to begin, a waiter gently took him by the arm and guided him to the gents.

Back at the clinic the problem was parting. Ujang looked at me wistfully and help on tight to my arm. We walked around the courtyard, warding off the poor demented girl and a tough looking skinhead who wanted a cigarette. Then we walked around again. And again.

At last one of the nurses took hold of Ujang while I squeezed past the metal door to make my exit.