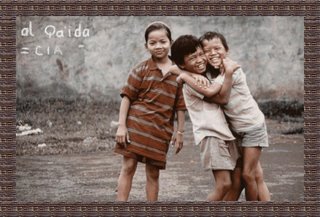 That evening, wearing a suit and tie, I attended a wedding reception at one of Jakarta’s five star hotels. In the ballroom, with its cream and gold walls and giant chandeliers, there must have been many hundreds of guests, mainly Indonesians. The bride was a demurely pretty girl called Rima, the niece of one of Fergus’s friends.

I joined the queue to shake the hands of the bride and groom who were seated on gold painted thrones on a stage. Rima and her mate were both attired in traditional costumes including brown batik skirts. They looked rather serious but both made an attempt to smile as each guest appeared briefly in front of them.

After the handshakes came the food. The tables for the buffet meal were laden with dishes of mie goreng, leaf-wrapped spicy vegetables, chicken in coconut, gado gado, baked fish, slow cooked crispy beef and all the things you might expect in a good rijstaffel.

As I loaded up my plate, I got talking to Sarwoto, a small portly Javanese in his thirties. He was part owner of a bar called Hadrian. On our visits to Hadrian, Fergus, Carmen and I had always found Sarwoto to be good company. He was highly educated and spoke perfect English; he was a genial and rather complex character; he was a Christian with strong animist beliefs; he came from a wealthy and well connected Indonesian family.

"He’s not just marrying her for love," said Sarwoto, who was wearing a princely gold Batik shirt.

"How do you mean?" I asked. "Not just marrying her for love?"

"Both. Rima’s father was a bank manager. There are also army and government connections. Her mother’s sister is married to a government minister. One member of the family owns five houses and five station wagons." Sarwoto grinned, perhaps admiring the family’s sagacity.

"Father’s in the Ministry of Social Welfare or something. Very rich. Giant mansion in Bambu Apus near Taman Mini, a house in Tebet and another in Bogor. Oh, and the groom works for Pertamina, the oil company. They’ll be able to send their kids to university in the States and have shopping trips to Paris."

"I was at another wedding today, in Bogor," I said.

"Two weddings in one day," said Sarwoto, looking in the direction of the food.

"There’s a lot of poverty in Bogor."

"I’m going to get some more of that beef," said Sarwoto, and off he went.

My first reaction to Sarwoto not picking up on my comment about poverty was disappointment, mixed with warm and comfortable feelings of moral superiority and false pride. Then, my chicken drumstick slipped off my plate. I remembered that Sarwoto regularly helped out at a home for handicapped children.

I sidled up to Jim, a young American businessman and pillar of the church.

"I came across this little kid with TB, pneumonia and malnutrition. In a poor kampung out in Bogor. The problem is getting advice about medical treatments. And the kid’s mother needs some advice about child care."

"There’s a lot of them die in the kampungs. Very high death rate. Not a lot one can do."

"Do you know of any organisation that could help?"

"It’s just that I want to help this poor kid."

"You know how you could help, if you’re wanting to do something charitable? My Scout group could do with an extra volunteer."

"Excuse me, I’ve just seen someone I must speak to before he goes. See you again some time."

And off he went.

Jim was very rich but he was a genuinely decent sort. Maybe it was difficult for him to feel deep sympathy for a kid he had not actually met; maybe he wanted his charitable giving directed mainly towards Christian run institutions rather than individual Moslems; maybe be was a pessimist about the chances of a foreigner successfully intervening in the life of a slum family.
I wondered what my reaction would have been if Sarwoto or Jim had mentioned the existence of some poor child to me. I would have thought that it was vaguely interesting, but it was up to them to sort it out.


In the post next morning was a letter from the director of the International Children’s Village in Lembang, near Bandung. It was about Abdul, whom I had found asleep on the bridge. The director had visited the grandmother’s village, which had turned out to be not so poor, and discovered a few more facts about the child. Abdul had a little brother and sister; his parents were already divorced; and his mother might be working in Saudi Arabia. The grandmother had decided to keep Abdul and so he had been returned to her. I suppose a grandmother is better than a children’s home or sleeping in the street.