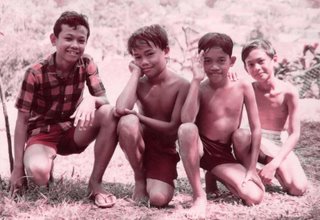 I left Fergus at the pool and went to visit Eddy and tubercular Asep in another part of Bogor. Eddy looked fine but I discovered his little brother Andi, aged about six, had a swollen stomach and match stick arms. I gave the mother some money to get him checked up on, at the hospital. The mother looked quite chunky but seemed about as bright as a reading light in a hotel bedroom. They say that malnutrition has caused vast amounts of mental retardation in Indonesia.

"Yes. For the hospital medicine. The TB medicine is very expensive."

"Jings. One hundred and twenty thousand rupiahs for the pills and the doctor’s included some imported vitamin tablets. The doctor must be getting commission."

"There’s a little girl’s been burned," said Asep, changing the subject. "A cooking stove fell over. That’s her next to Eddy’s house." Asep pointed to a shy little barefoot girl with a cute grin. She looked about ten.

"Been to the doctor?"

"OK. If her mother agrees, we’ll take her to the hospital now."

The little girl’s leg had been badly scarred from knee to upper thigh and it wasn’t difficult to persuade both her and her mother to visit the hospital. The doctor applied some dressings and asked her to return the following week.