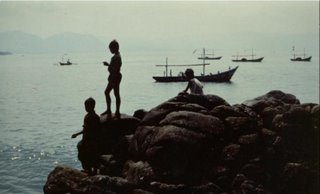 Doctor Bahari’s small clinic, housed in what had once been a sizeable middle class villa, was different from the Jiwa Hospital. It had a doctor, a small, grey haired, plainly dressed, thoughtful-looking lady, who invited us into her office. She asked the boy some questions in a respectful way. He remained silent. He looked puzzled and drained.

I related what I knew about Ujang, which wasn’t much. Then I asked, "Can you take him into the clinic?"

"Thank goodness!" I breathed deeply and smiled at Ujang, whose eyes possibly picked up the signals coming from my face. At least he was now looking me in the eye.

"You’ll need to buy him some sandals and new clothes," said the doctor looking at Ujang’s bare feet and over-long trousers.

"What’s wrong with Ujang?" I asked the doctor.

"It’s too early to say but it’s possible he’s mentally backward," she explained.

"Do you think Ujang has a family?"

"He probably does, as he seems socialised and able to show affection."

"Do you think we’ll be able to find his family?"

"It’s unlikely. Jakarta is a very big place. Even if we did find them, they might not want him back!"

The next stage was to pay for ten days stay at the clinic and for the purchase of some clothes. The clinic was certainly expensive. Not that I minded, as a place where you had to pay a lot of money was more likely to look after Ujang properly.

We entered the quarters for the less seriously ill patients, the majority of whom seemed to be middle class Chinese Indonesians suffering from stress or breakdowns. The appearance of this part of the clinic was that of a dimly lit, run-down boarding house There were pot plants, comfortable old chairs, and even individual bedrooms. There was a rat in the gutter, but it looked healthy and happy.

Then we entered the section protected by metal bars and a locked door. This was a large sparsely furnished courtyard with smaller cell-like bedrooms off. This prison-like area was where Ujang was to stay along with half a dozen or more patients who all looked heavily drugged and deranged. The only child, apart from Ujang, was an angry looking, lunatic girl, who followed me around, occasionaly grabbing at my arm. The fiercest patient was a man in his forties with staring eyes who staggered up to me and demanded a cigarette. A male nurse simply pushed him away. The nurses seemed to be the same types as at the Dipo Hospital, grinning like tigers.

I put my arm around Ujang’s shoulder and tried to explain things to him, but I think that to him my words were without meaning. Could I leave him in this place with its mentally disturbed adults? There seemed to be no alternative. He had to be in a secure place where he would receive food and shelter. Fingers crossed that nobody would hurt him.

I took Ujang for several walks around the courtyard and then stayed chatting to the nurses as long as possible, but eventually I had to move towards the exit. Ujang wanted to come with me. He looked like a pup about to be abandoned. He clung on to me very hard until the nurses prised him off.

"I’ll be back tomorrow evening," I promised.