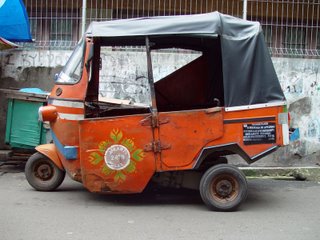 Photo by Jonathan McIntosh
http://commons.wikimedia.org/wiki/User:Thehero
http://capedmaskedandarmed.com/
I walked home at speed, a journey of twenty minutes along potholed pavements, and collected a few thousand rupiahs. As I hurried back to the market I hoped I would find the kid still in the same place. And if he was still there, what then? The sadness on his face had been haunting. He hadn’t looked manic or psychotic like Bangbang. In fact he had the delicate face of Botticelli boy or a Michelangelo Madonna. Had his family thrown him out?

Why wouldn’t he speak? I grew more and more anxious to get back to the little cinema before any possible decision on his part to wander off and disappear for ever. I didn’t want another failure.

Sweating, and with nerves writhing, I reached the crowded bazaar, the games arcade and then the cinema. There he was seated on the pavement. Thank heavens. I took his hand and he accepted it. I was making progress. I walked with him towards the stall holder who had given him the free drink.

"Does this kid live here?" I asked.

"No," said the stall holder. "I don’t know where he’s from. He wandered into this area recently."

I took the boy round the corner to some kampung houses, stopped an old woman and said, "Do you know this child? Does he have a family?"

"He’s not from around here," she said.

I tried another stall holder next the cinema. "What should I do with this kid? Where can I take him?"

"He’s mental," said the elderly man, in a sympathetic tone. "You could try the Jiwa Hospital for the insane or the Dipo Hospital. They’re both in the city centre."

"Are you sure he doesn’t have a family? He doesn’t live near here?" I asked.

"He’s not from here," insisted the man.

I flagged down a bajaj, an orange three wheeled taxi, and found that the lad was happy to get in. No problem. No protests. No struggling child. No lynch mob to accuse me of kidnapping. The kid still held my hand.

"Take us to the Dipo Hospital," I said, as we set off.

"That’s an hour’s journey," said the bajaj driver. "This machine only does short runs." So after ten minutes we transferred to a red four wheeled taxi, with broken air conditioning, which took us by a circuitous route to our destination, the big hospital from which Bangbang had escaped. I asked the driver, a tall man with a gold chain round his neck, to wait while I went to the hospital’s front office.

"I found this kid in the street..." I said to the two strongly built men at the desk. They looked like off-duty commandos. I briefly explained the story.

"What’s wrong with him?" asked the slightly fatter one, hardly able to contain his mirth as he studied the ragged, trembling waif.

"I don’t know, but I’d like to have him admitted to the hospital," I said.

"Has he got a fever?" said the slightly thinner one, derisively.

"No. I don’t know what’s wrong with him," I explained. I was incensed by their lack of sympathy for the boy.

"Well he can’t come into the hospital if there’s nothing wrong with him," said the fatter one.

"He’s very thin, he won’t speak and seems to have no family," I said.

"Maybe he’s mad," said the thinner one, and they both guffawed.

This was the hospital which had raised my blood pressure when it had managed to lose Bangbang. Now I realised it would be stupid to trust the same hospital again. I took the desperately worried looking child by the hand and returned to the taxi.