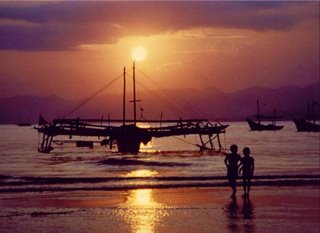 On the way back from Pelabuhan Ratu I stopped off in Bogor to see little five-year-old Budi. His mother came up to the van, before I had time to get out, and spoke to Mo, my driver.

I felt concussed. I felt my insides lacerated. "What happened?" I asked the mother.

"He got a fever," she said, grinning, in the way that Indonesians sometimes do when trying to soften the effect of bad news.

"Did you go to the doctor?"

"There was no time," she said.

Mo and I drove back to Jakarta in silence. My first big challenge in Indonesia had been to get Budi better, and I had failed. How could it happen? Where had I gone wrong? Shouldn’t there have been a happy ending? Where were the angels? I pictured Budi crying and his mother showing her teeth.

As we sped along the motorway I stared at the strange shapes of the clouds and tried to rest my brain. But I kept on thinking about Budi. And I kept on thinking of my failure, my hurt pride. In the months before Budi had died, I had made fewer and fewer visits to the child; I had left it to my driver to deliver the small sums of money for his medicine; I had given them the bare minimum in cash and time.

I had to go to the Piste Top Bar that evening to meet Fergus. The Filipino band were in a very jolly mood and they were talking to the audience.