Anne, Bob and Pauline in Menteng 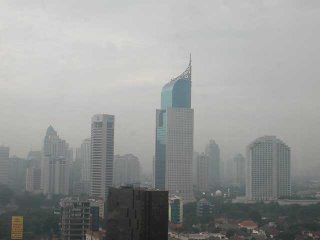 Towards the end of the Christmas holiday I received a dinner invitation from a personable teaching colleague called Anne, who lived in the centre of Jakarta, in a posh district called Menteng. Anne had a businessman husband called Bob and a teenage daughter called Pauline.

The evening sky was full of dark pink clouds as my vehicle travelled through grey, traffic-filled Kebayoran Baru and on to Menteng, home to embassies and President Suharto. The bumpy ride was enlivened by a knife wielding gang of high school students hanging from the doors of a graffiti covered bus, the occasional plain clothes policeman at a street corner, and exhibitionist ragamuffins selling posters and toys.

Anne’s house was a 1930’s mansion full of ferns, antique furniture, faded photos in silver frames, and marble statues of Buddhas and fauns. A maid led me to the far end of the living room where Pauline, attired in T-shirt and jeans, was watching Taggart on TV. Next the TV was a desk with a computer and pile of school books.

Pauline stood up, stretched herself, and gave me an welcoming smile. She had a pretty nose.

"Hi. Mum’s on the phone," explained Pauline. "She’ll be here in a moment. I’m supposed to be doing homework. It’s Baudlaire. Can I read you a bit?" She picked up a book.

"There are perfumes as cool as the flesh of children," she read. "Sweet as oboes, green as the prairies." I was aware of two maids hovering in the background.

"Does it make any sense?" I asked.

"What is Baudlaire saying some perfume makes him think of?"

"What do you think?"

"Children’s flesh around here makes me think of ringworm, fungal infections and scabies."

A smiling Anne emerged from the kitchen. Anne always reminded me of Monaco’s Princess Grace, or perhaps a respectably dressed Madonna, the singer. Yet she worked as a humble teacher and her face suggested genuine compassion and concern for the world.

"Kent, sorry to be neglecting you," she said. "I was hearing awful things about torture and murder carried out by the military."

"No. The British army in Malaysia."

"Let’s go out to the garden," suggested Anne.

Anne and I went to sit on comfortable chairs positioned on a terrace that overlooked the dimly lit swimming pool. The frogs were making loud frog noises and frightening away the mosquitoes. A maid brought us glasses of white wine; Pauline fetched some olives.

By the time our glasses were empty, Bob had arrived, and a maid, positioned beside a table at one end of the terrace, was ready to serve supper. Bob was wearing a smart grey suit and looked like a slightly tired film star, used to playing the part of a kind and respectable husband.

"What have you been getting up to?" asked Bob, after we had loaded our plates with beef sate, peanut sauce, red peppers, French beans, new potatoes, green mango, avocado and lettuce.

I told them about my trip with One Hand to the Dipo Hospital.

"You have to be careful with hospitals," said Anne, looking pensive.

"British ones," said Bob, as he refilled my glass with meaty red wine. "Over a thousand people die each year in British hospitals because of mistakes with medicines."

"I was thinking about Florence Nightingale," said Anne. "She thought she was helping the soldiers in the Crimea, but the death rate went up at her hospital after she arrived. Her hospital had the worst record in the area."

"Why was that?" asked Pauline.

"She was a bit of an amateur," explained Anne. "At first, she didn’t understand enough about hygiene."

"The problem in Indonesia," said Bob, "is that medical standards are not always very high."

"That seems a very long time ago!" I replied. "Actually, it was interesting, but after teaching I’ve no energy for that sort of thing."

"I know what you mean," said Bob, looking sincere.

"One or two people in Bob’s office seem to find the energy," said Anne. "What is it Baudelaire says? ‘After debauchery one always feels more alone, more abandoned.’"

"I was interested in the life of this poet Pauline’s been studying," explained Anne. "He seemed to find it difficult to resist the Paris nightlife, and ended up feeling like someone expelled from Paradise."

"Talking of the office," said Bob, "that new chap Carl was comparing this country to Nigeria. That was his last posting."

"Different civilisation," said Anne. "Nigeria’s never had anything quite like Borobudur and Buddhism."

"That’s what I said," continued Bob. "But he went on about corrupt politicians and soldiers, the potential for clashes between Moslems and Christians, tribal wars with primitive weapons, and so on. He’d been to New Guinea. He said the Christians there believed in evil spells and killing each other with bows and arrows, except on Sundays. He said the parents trade their daughters like cattle."

Diverse it certainly was. As I was being driven home, a host of images passed through my mind: massage parlours and mosques, volcanoes and flame trees, shanty houses and luxury mansions, and Budi, Abdul and One Hand. I was slowly learning about the Third World, but I hadn’t yet made any deep friendships with Indonesians. I hoped I wouldn’t have to wait too long before finding my soul mate.