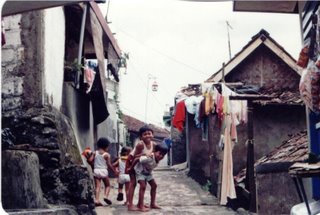 One March evening, as I was about to drink my after-supper coffee, the maid appeared with a startling message.

"Bangbang’s father is here to see you," she announced.

Various thoughts flashed through my head. How on earth had Bangbang’s father got my address? Had the Dipo hospital given it to him? Was he a big strong chap in the habit of carrying a machete?

I walked slowly to the door, trying not to think about what a father might say about the disappearance of his son from a hospital.

The father was a thin little man with a wonderfully warm smile. "Bangbang has returned home," he said, handing me some bananas. "I’ve come to thank you for helping him at the hospital."

"Thank you," I said, letting out a sigh. "I’m sorry Bangbang disappeared. I am very relieved he’s come back home."

"Would you like to visit my home? It’s near Kebun Jeruk," he said.

A half hour drive took us to Bangbang’s house, a narrow, garage-like building next to a busy highway. Bangbang’s smiling mother, bigger than her husband, had the gentle manner of a nun. The house seemed to be full of children. A shy but grinning Bangbang stepped forward, squeezed my hand and gave me a little punch.

I was given a quick tour of the small habitation. Cheap curtains acted as walls for the two bedrooms; water in the combined toilet and kitchen was supplied by a pump; Islamic pictures decorated some walls.

Father and I sat on a broken settee in the lounge and had a brief chat.

"Is Bangbang getting any medicine for his epilepsy?" I asked.

I handed him a little money and received warm thanks. He did not look at all like a man who would beat his epileptic child.

"You have a large family?"

"He keeps on running away."

From time to time Bangbang would make a face and punch one of his brothers or sisters on the arm. They just smiled. I hoped he wouldn’t punch his gentle-looking mother, who was heavily pregnant.