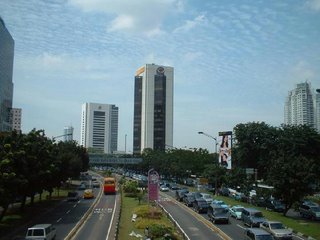 The second school term had begun and we were now well into 1991. The school was running fairly smoothly, I had hardly ever been bitten by mosquitoes, and my tummy was behaving itself. Best of all I had lots of time off, thanks to the short school day and the large number of public holidays to celebrate the holy days of Moslems, Christians, Hindus and Buddhists. There were always exotic new people to meet and totally unfamiliar situations to offer a challenge.

One Saturday morning in February, I was being driven past the glitzy skyscrapers on Jakarta’s Jalan Sudirman towards the Hongkong Bank when I saw a body lying lifeless on the grass on the central reservation. The body was that of a small boy and he looked as if he might have been hit by a car. Two adults had stopped to have a look.

Should I get out and offer to take the child to hospital? In Indonesia there is the danger, when someone has been hit by a vehicle, that an enraged kampung mob will appear and try to grab the supposed driver so that they can kick and beat him to death. There was no sign of a mob. A quick decision was called for. To stop or not to stop?

"Stop! Park!" I yelled to Mo, my driver. The traffic slowed and I was able to get out of the Mitsubishi and over to where the body lay.

A policeman had arrived. The boy looked about ten years old, was poorly dressed and had the face of a youthful garden gnome. Fortunately he was breathing and had no obvious injuries.

"What happened?" I asked, in order to establish that I had nothing at all to do with the accident. "Is there a hospital nearby?"

A man pointed. We were right opposite the modern Jakarta Hospital. The policeman picked the kid up and I followed them all the way to the emergency room.

A young Chinese-looking doctor, having given the boy what seemed like a five second examination, declared that nothing seemed to be broken and that the urchin could be returned to the street. The boy’s eyes were now open and he was able to answer the nurse’s questions.

"He’s a street kid," said the smiling doctor, addressing me, "and he’s not right in the head. Probably also has epilepsy. He says he has no parents and his name is Bangbang."

It was becoming clear that indeed Bangbang wasn’t completely normal. He suddenly poked the doctor in the stomach and then stared at him hard with a wide-eyed manic grin. The doctor chuckled.

Back to the street? Surely not.

"Maybe he should have an x-ray to see if his head’s been injured," I suggested. "I’ll pay."

"He’ll need to go to the Dipo Hospital," said the doctor. "They’ve got a place for mentally disturbed children there."

So, with the policeman and Bangbang, we drove in my vehicle to the hospital I had previously visited with One Hand. Bangbang sat fairly quietly, enjoying the ride. Only occasionally did he poke me gently in the ribs and give me the staring grin.

The policeman, an affable chap, took us to the drab emergency room, where a doctor looked at Bangbang and decided he could be admitted for tests. The policeman showed me where to pay the deposit for Bangbang’s stay and then led us down long dingy corridors until we came to the absolutely vast quarters reserved for stressed, mentally ill and mentally backward kids. The high ceilings and dark walls reminded me of classrooms in Victorian schools. Bangbang seemed to be the only patient.

The three nurses on duty stopped watching their TV in their little office and started to chat to the policeman and the new little arrival. Jokes seemed to be being made but I couldn’t make out what was being said. They all seemed totally at ease, in a Javanese sort of way, and to be enjoying each other’s company. Bangbang looked content and I relaxed. The policeman shook my hand, accepted some money for his bus fare, and departed.

"Mister likes children?" asked the oldest nurse, a lady in her mid-thirties whose face, shoulders and hips made me think of a happy Hermann Goering. Her name was Fatma.

"I felt sorry for Bangbang," I explained. Fatma’s eyes suggested she might be sneering rather than smiling.

"Mister has no children?" she continued. The other two nurses were now grinning.

"Two children," said Fatma. I noticed on one of her fingers a chunky gold ring that didn’t look cheap.

"And now you’ve got Bangbang to look after," I said. "I’ll be back tomorrow evening."

"Bring us something nice," said Fatma.

Next afternoon I brought some chocolates to the nurses who smiled and looked pleased. Bangbang trotted up to me, squeezed my arm, took my hand, and gave me a sudden punch in the stomach. Fortunately it was a gentle, friendly punch. Bangbang and I then took a walk around the ward.