6. ONE HAND AND HIS MOTHER 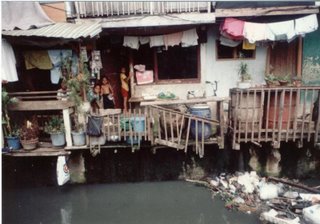 Christmas 1990 was approaching and I had shopping to do.

Mo, my middle aged driver, wasn’t smiling. I could tell, as I could see a tense little mouth in my vehicle’s front mirror. It was the late afternoon rush-hour and I had asked him to stop on a very busy street called Jalan Katedral, a street which has Jakarta’s main mosque on one side and its cathedral on the other. I had spotted something strange. Seated at the roadside with his rough featured, peasanty mum, and a plump baby, was a boy aged about six. The boy had no hair and no shoes. Even worse, he had no trousers and one of his hands was missing.

I don’t think Mo liked the look of the trio but I got out of the Mitsubishi and crossed the road to speak to them.

The mother pointed behind her at the broken fence and the patch of waste land behind.

"Has the boy got no trousers?" I asked. The boy had the sort of innocent look worn by little African children in Oxfam pictures; he had sores on his legs and bare bottom. And one of his front teeth was missing.

"We haven’t any money," said the mother. She had the face of a big tough Red Indian who had fallen on hard times.

"The boy has only one hand?"

"He lost his hand. His name is One Hand."

She held up her fist, seemingly to indicate that someone had punched the six-year-old. Perhaps she had punched him.

I handed the woman some money, whereupon she got up and swiftly disappeared round the corner, with the baby, heading in the direction of the nearby market, called Pasar Baru.

One Hand clutched my leg and rubbed his head against it. Then he picked up a piece of grass and began to play with it, with one hand.

I walked round the corner to see where the mother had gone, but there was no sign of her. One Hand followed me. We crossed the road to Jalan Antara where several of the homeless slept. Mo, my driver, brought the vehicle over and acted as my translator as I spoke to one of the families. A ragged woman, with a thin but pretty face, told us that One Hand’s father no longer lived with them. At this point, One Hand wandered off, out of sight.

"Where will the mother be?" I asked the ragged woman.

"She’ll be back later," she replied with a cheery grin.

Having done some shopping, I returned to Jalan Antara. The sky had been darkened by black rain clouds and the air was warm and damp. One Hand’s mother, carrying her baby, emerged from the shadows. The lady appeared to be wearing a new dress and new earings. Where was One Hand? Round the corner he came, head down, still wearing only a shirt.

"One Hand still has no trousers," I said to the lady.

As I spoke, the baby produced some yellow diarrhoea.

Mo, my driver, was looking even less happy as I ushered One Hand, his mother and the baby into my van. It was a short journey to the huge and ancient Dipo Hospital. This was a place of dim lights, high ceilings and malodorous stains.

The doctor could see the baby was fat and smiling. "Not much wrong," he said, as he wrote out a prescription.

Outside the hospital I asked the mother, "Would you like some clothes and shoes for the boy?"

So we did some shopping in the traffic free streets of Pasar Baru, buying a shirt, a pair of shorts and some sandals. I felt like a happy Santa Claus dispensing gifts. I felt Christmassy.

"I’ll come back tomorrow at six o’clock to the spot where I met you," I explained. "Will you be there?"

I left them seated on the dark wet pavement watching the luxury cars go by.