12 THE HAVE A NICE DAY HOTEL 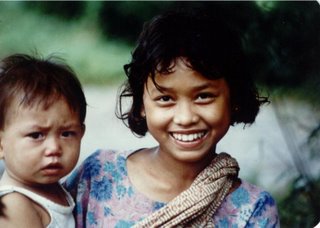 The weeks went by and I continued to visit Min every day. He began to put on a little weight. Some days there were moments of great cheerfulness but on other days he was moody and wouldn’t speak. On his bad days I looked at his shaky little legs and his sad, lost-looking little face and felt my own mood worsen. I worried about his unhappiness and but couldn’t think what on earth to do about it. I decided I needed a Saturday trip, to take my mind off things, and headed for Bogor, with Fergus.

Having arrived at Bogor’s Have A Nice Day Hotel, Fergus and I sat in the hotel’s shady garden supping Bintang beers. The sky was blue and the air was pleasantly warm.

"Why do we come to this hostelry?" asked Fergus, in a jovial mood.

"The view of Mount Salak, these Romanesque statues in the garden and the cool beer," I replied.

"It’s certainly not for the swimming pool," said Fergus. "It’s a black sort of green, like a smelly old durian."

"Look at that pile of bricks and muck dumped beyond the pool. And the wood under these tiles is rotted. This place has hardly been up a year."

"The owner was telling me he’s a civil servant," said Fergus.

"So how come he has the money to build a little inn? What does a civil servant earn? Thirty dollars a month?"

"It wouldn’t be so bad if they were making lots of money from tourists, or anybody else, but we seem to be the only customers."

"Tourism’s supposed to become Indonesia’s biggest industry," I said. "Bogor could make a fortune from tourists. It’s as magical as Bali."

"You’ve never been to Bali," pointed out Fergus.

"I’ve seen the postcards," I explained, "and Bogor has the same sort of mountains and rice fields."

"The locals live for the day," continued Fergus. "Piles of garbage as high as the houses, graffiti, pot holed roads jammed with minibuses, and sloppy service."

"Imagine if the Italians ran this city."

"The organised criminal ones from Naples and Bari?" asked Fergus, smiling.

"No, the hardworking ones from Sorrento and Capri."

"It could be full of street cafes and jam packed restaurants."

"Well, I’m always happy to lie beside the pool and read a book," explained Fergus, who liked to sport a good tan. "You couldn’t do this in England in December."

"I like the fact you can walk into someone’s funny little house and they’ll sing and dance. And every walk is an adventure; into a balmy nineteenth century world."

"What are you reading?" I asked Fergus.

"Wilbur Smith. Always a good read. What have you been reading in that notebook?"

"Stuff for a school project," I explained. "It’s jottings I made at the British Council library; things people have written about Indonesians."

"Alfred Russel Wallace, in the 1860’s, talks about the people here in Java being impassive, reserved, diffident and bashful. He says the upper classes are terribly polite and are like the best bred Europeans. Francis Drake believed the South Javanese are loving, true and just."

"And the bad news?" Fergus inquired.

"Wallace says the people have a reputation for being ferocious and bloodthirsty. Some guy called Nicolo Conti, in 1430, writes that the Javanese and Sumatrans are more cruel than all other races. They look on killing a man as a mere joke. And listen to this. Conti says that if one of them buys a new sword, and wants to try it out, he’ll thrust it into the first person he meets. And nobody will be all that bothered. So watch out if your maid buys a new can opener."

"Someone called Barbosa, writing round about 1860, thinks the Malay race, including the Javanese, is very subtle in its doings, very malicious, great deceivers, seldom telling the truth, prepared to do all sorts of wicked things and so on. Wallace believes they don’t have much appetite for knowledge."

"Sounds like some of the kids I used to teach in Britain," commented Fergus.

"I wonder what a Javanese explorer coming to Europe or America in 1800 would’ve reported," I said. "Slavery in Russia and America? A large chunk of the British population starving?" I was showing off my limited knowledge of history.

"Terribly polite upper classes who might look on the death of a black slave, or a deformed child worker in a factory, as a matter of no great importance."

"Talking of slavery, " asked Fergus, "I don’t think our waiter’s coming back to offer us another drink."

"The waiter was saying this used to be his father’s land but he sold it, and was able to buy a television and pay for some repairs to the roof of his little house."

"I reckon this land is worth half a million dollars. There are generals and judges with mansions around here."