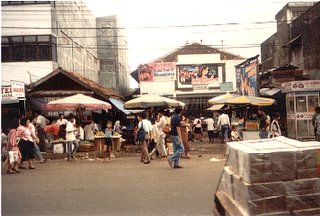 Sometime during the second half of 1991, something happened which I felt I might have previously glimpsed in my dreams.

My driver, Mo, had not turned up and I was in an ulcerous mood. It was a Sunday but I had no transport. I decided to go for a walk and headed along the dusty main road in the direction of the wonderfully scruffy market at Kebayoran Lama.

The market had its usual Congolese appearance, or perhaps it was Calcutta on a bad day. Rising from a choked and crumbling drainage ditch came the smell of bloated dead rats and human excrement; a three wheeled taxi with an explosive exhaust set down a woman in an Islamic headscarf outside a jerry-built shopping bloc; an orange bus covered in schoolboy graffiti swerved around a pothole as big as a car tyre; piles of fresh cassava, chilli and taro stood next to a mountain of steaming rotting vegetable matter; a bandaged leper was having money extracted from him by a uniformed official; a policeman was ignoring the unsmiling pickpockets and the tattooed street thugs with their army-style haircuts; big-eyed, thin-limbed street kids were selling plastic bags next the stalls selling shoddy shirts, pirate cassettes and toy guns; dangdut music blared from the stolen radios guarded by vendors seated on the railway tracks. In its own way the market was gorgeous and bewitching.

Down a narrow Dickensian lane there was a games arcade, unlit inside, and next to that a flea-pit cinema showing an Indian film.

Seated on the cracked pavement in front of the cinema, in a state of utter dejection, was a young boy. He was barefoot, dressed in a dirty ragged shirt, and long trousers several sizes too big. He was moving his head from side to side like a depressed young panda in a zoo. At his feet were a few scraps of cooked rice on a piece of brown paper. Was he about twelve years old? Difficult to tell as he was so undernourished. I decided to find out what was wrong with the boy.

"What’s your name?" I asked, as I squatted down in front of him.

There was no reply; he avoided eye contact. I asked a few more questions but got no answers. I stood up, moved back several paces and watched. Passers-by ignored him, or, in the case of three well dressed young men, mocked him with jeers and insults.

At one point he stood up, a little shakily, and walked to a stall selling drinks. He held his head high, and, in a surprisingly insistent manner, held out his hand to demand a drink. The young stall holder, no trace of emotion on his face, handed the boy a glass of coloured liquid. The kid drank thirstily before returning to his little patch of pavement.

What was I to do? The lad seemed like a hopeless case; he was not the sort of normal, cheerful, talkative waif or stray I had envisaged myself helping when I had first arrived in Jakarta. In any case, I had no money on me and without money there was no possibility of transporting him to some hospital or other institution, if indeed that was appropriate. He couldn’t stay with me at my house; I was not allowed by the terms of my lease to have any guests stay at my home, other than family and friends from Britain. And yet I couldn’t abandon this child.