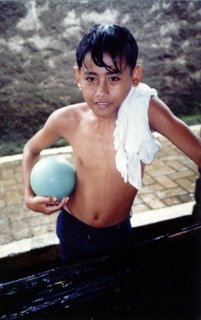 I bought a wheelchair in the down-town area of Glodok, collected an anxious-looking Min from Wisma Utara, and walked, with the chair, to the house of Tejo, the man in the attic.

"Hi, Ijah," I said, on entering the house. "Can we take Tejo out in this wheelchair?"

"Ah, you bought it for him. Thank you. Yes." Ijah was again wearing her Islamic uniform. She smiled demurely.

"Are you coming with us?" I asked her.

Ijah and I carried a surprisingly light Tejo down the narrow wooden stairs and sat him in the wheelchair. He was smiling as Min and I wheeled him out the door and down the sunny lane.

The sky was brilliant blue, the birds twittered happily and the gardenia was in full bloom. At the bottom of the road we met a girl collecting washing from a line strung up outside her little house. The girl had sparkly eyes, lovely lips and long, slim legs. I noticed that Tejo was grinning happily.

"Who’s this in the wheelchair?" the girl asked, while giving us a cheerful smile.

"This is Tejo who lives in that big house up the street," I said. "The one with the green shutters."

"I’ve never seen him before," said the girl. "That’s the neighbourhood chief’s house up there."

"I don’t think Tejo ever gets out," I said. "So I’m letting him get some fresh air."

We did a circuit of the area and then returned a happy Tejo to his home. There, in the lounge, we were met by a worried looking Ijah and a cross faced young man.

"This is Tejo’s brother, Harjo," said Ijah, introducing Cross-Face and looking down at the ground. Cross-Face wore a smart shirt and his thin face had the scowling look of a bad-tempered Sicilian.

"You can’t take Tejo out of the house!" said Harjo, sulphurously.

"We were giving him some fresh air," I explained. "I bought the wheelchair for him so he can get out and about." Taken aback by Harjo’s fury, I found myself shaking. Min was staring at me and looking scared.

"Are you going to take him out?" I asked angrily.

"Do you want me to take the wheelchair away for someone else to use?" I asked.

"Is Ijah going to take him out?" I said.

"Well what’s the point of having the chair if he’s not allowed to go out?" I protested.

An older, taller man appeared from a back room. He had the muscular look of a soldier and a face that showed no emotion.

"He might go out in the evening," said the older man, "when it’s dark"

"There are institutions for people like Tejo," said Harjo, looking like a mad crusader or jihad warrior. "We may put him in a home for the handicapped."

There was a period of silence and then Min and I made our exit and returned to Wisma Utara.

I decided it would be better not to try to take Tejo out again, in case that made his family decide to banish him to some mental home. The male members of the family were obviously embarrassed by their crippled relative and felt they would lose face in the neighbourhood if he was seen around. I hoped I had not already done irreparable damage to Tejo. Oh dear! I had meant well.