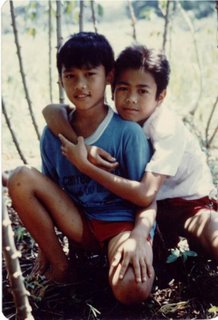 Come Sunday my driver and I took the road to Ciomas, in the hills above Bogor. The sky was clear and the hills, when we reached them, were the sort of sharp grey-blue you might see in Spain’s sunny Sierra Nevada. We parked beside a roadside stall where I bought a plant called Red Ginger. The plant’s bright red luminous flowers must have been nearly thirty centimetres tall.

Leaving the vehicle behind, I set off on a long country walk. I passed a falling down primary school, a tiny mosque with an onion shaped dome, fields growing maize, and a little hamlet with lots of banana trees and light pink bougainvillea.

After a pause to take some photos, I took a path through some woodland, which had that dark steamy smell of rotting flowers. Some way into the wood I came upon an old man and three schoolboys, aged roughly twelve to thirteen. The boys looked as if they were on their way home from school.

"I’m from Proxima Centauri," I replied.

They tittered politely, presuming that I had tried to make some kind of joke.

The boy with the cleanest white shirt was called Lukman; the one with buttons missing from various parts of his clothing was called Andi; and the lad with a cigarette packet in the back pocket of his red shorts was Udin. The gnarled and cheery old peasant was called Herry, and he was the grandfather of Andi.

"We’re going to look for lizards," said Lukman. "Do you want to see one?"

We passed through a wilderness of boulders and bushes and came upon a small, wooden, open-fronted hut or pendopa half-hidden in the middle of a zone of tall grasses, rocks and small trees.

Herry and I sat on the front steps of the hut; Andi searched in the undergrowth and almost immediately pulled out a small lizard which he placed on his head; Lukman found an even smaller lizard and let it crawl under his shirt and then up his leg; Udin lay on the ground and smoked a kretek cigarette.

"Are there snakes here?" I asked.

"Yes," said Udin. "Lukman got bitten once. Had to go to hospital. His leg all swelled up."

Lukman pointed to a small mark on his skin.

"Up there in the branches," said Andi, who immediately began to climb up the nearest tree like a circus acrobat. He swung from a branch making Tarzan noises, while Lukman tried unsuccessfully to pull him down, by grabbing at his clothing. To Andi’s left I could see a spider’s web and an elegant red and blue coloured spider whose body was the size of a thumb.

When Andi returned to the ground he was scratching his bare limbs.

This area seemed like a Huckleberry Finn paradise for children, a domain from a South Sea treasure island; and yet it had mosquitoes and snakes and maybe even leprosy. My tummy rumbled.

"I think it’s time for me to get back to my vehicle," I said. "Can you show me the way back to the road that goes to Bogor."

"Which road? There are lots of roads," said the old man.

"I don’t know," I said. Not for the first time, I was lost. It happens sometimes.

We walked and walked until we reached a narrow stretch of road. I didn’t recognise it, but, there was a leather-jacketed young man standing there with a motorbike.

"Can you take me to the road that goes to Bogor?" I asked the man with the bike.

"No problem," he said, smiling.

Having said goodbye to Andi and Lukman, Udin and I were given a wonderful motorbike tour of the Ciomas countryside. We bumped along under tall dark trees, past a boy carrying a great bundle of grass on his head, over rivers full of kids pretending to be Mowgli, past a little fairground in a field, through hamlets with geese and goats, and on and on. The light was fading. Then we reached a roadside stall.

"Hey!" I said. "That white van down that path. I think it’s mine. Yes it is." My flipping driver must have taken it off the main road and hidden it in a camouflaged position.

I paid the bike driver and Udin and got driven home in silence.