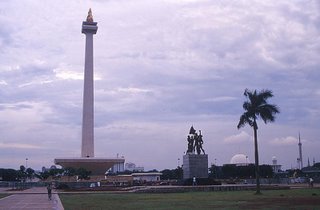 Late that afternoon, I took Min to Medan Merdeka, the vast parkland which lies at the heart of the administrative district of Jakarta.

The main feature of the park is former President Sukarno’s big erection, the white, marble obelisk known as Monas. Sukarno, a man who reportedly had nine wives, although never more than four at any one time, had his 132 metre erection topped with a gold-plated flame, paid for apparently by the World Bank. Monas is an elegant monument and it commemorates Indonesian independence; the phallus shape symbolises fertility.

By day, Medan Merdeka can be a sunny green space filled with joggers, vendors selling balloons, children playing in ponds and office workers enjoying steaming, noodle snacks. By night the park is said to be home to runaway children, drug dealers, prostitutes and plainclothes policemen.

For Min and I, the first stop was a stall selling fruit, everything from custard apples to mangoes. Min grabbed a piece of melon without waiting to be asked. I could see how he had survived as a street child. The stall holder was laid back about the incident; I paid for the fruit and apologised on behalf of Min.

Min was having one of his better days. There was a little less of the sad, lost look about the skinny little creature and he was a bit more steady on his feet, in spite of the drugs Dr. Joseph was pouring into his fragile body.

As Min and I wandered along various paths, I tried to imagine this park as it had been in former times: a field for grazing cattle, a training ground for the soldiers of the Dutch East Indies, and, in the 1960s, the site of mass rallies where Sukarno made rousing speeches attacking the western imperialists.

It began to grow dark and we headed across an area of grass in the direction of the road where my vehicle was parked. Suddenly a straight backed man in a khaki T-shirt loomed up in front of us. He looked like trouble.

"Who’s this child?" he demanded to know. His rude tone didn’t put me in the mood for giving a friendly explanation.

"This is Min," I replied simply.

"What are you doing with an Indonesian child?" He stood in front of us, barring our way.

"What right have you to be with him?"

"He’s mentally backward. I found him in the street and now he lives in an institution."

Judging by the sneer on the man’s face he thought I was a kidnapper or worse.

But then I remembered Dr. Joseph’s note, took it from my pocket and handed it to the man to read. At the same moment, Min separated himself from my hand and began to do what looked like a drunken Maori war dance, accompanied by various simian, whooping sounds.

"Look, would you like to take this kid home with you? You can have him," I said, confident the man would not take me up on the offer.

The gentleman stared at Min, had an attack of the willies, turned, and slunk off. Min and I returned peacefully to the clinic.

As I was being driven back home to my house I was thinking how lucky I was to be in a place so full of exciting little adventures. And what about Min? I saw him as being a mixture of two-year-old and teenager. The speech part of his brain and the ice-cream-in your-face part of his brain suggested an age of two years. But the war dances, the moody expressions, and the reasonably advanced survival skills made me hope that part of his brain was teenage. Whatever his age, Min certainly had character.