I picked up a metal chair 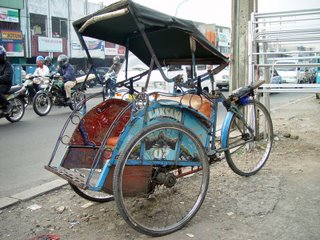 Later that afternoon, when I visited Min at Doctor Bahari’s clinic, I got talking to two of the nurses. One was a moderately good-looking, middle-aged female and the other was a big, muscular and moustachioed male.

They told me about a twice weekly school for backward children, run at the relatively nearby Jiwa Hospital.

The two nurses took me into a side office to discuss prices.

"He’ll need to go on my motorbike," said the male nurse. "It’ll cost one hundred thousand rupiahs each trip."

"One hundred thousand or he won’t get in," insisted the male nurse.

"He’s a poor street child who’d benefit from a bit of training.," I said, hoping for some sympathy. "I’ll pay twenty thousand."

I wanted some physical expression of my anger but decided it would be unwise to punch the muscular man. He was much bigger than me. I picked up a metal chair and slammed it down hard on the floor. It made a very loud noise. Neither of the nurses looked particularly moved or concerned, but Min looked white and scared. I thought I had better forget the schooling, calm down and make some kind of peace.

"I’m sorry to get stressed," I said. "Jakarta can be a difficult place sometimes."