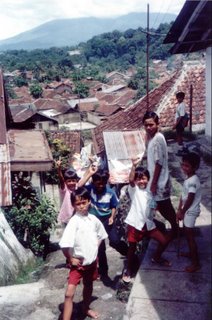 Rain was threatening as I strolled alongside one of Bogor’s canals, thinking I was in Burano, near Venice, in an earlier era. There was an aroma of toilet water with a hint of coriander and frog. White shirts, red dresses and blue jeans hung on a washing line silhouetted against a cloud-blackened sky. There was a chirrup of birds from cages hung beneath roofs.

It was Dede, fan of Manchester United, and I accepted his invitation to sit in his simple front room, where his granny was doing some sewing and the television was showing a Japanese cartoon.

"It should be by now, after all these months."

Dede and I practised some English for ten minutes. Then I noticed a curtain moving.

"Hello Mr. Kent," said a figure emerging from the bedroom. It was the lovely Rama, dressed in a little lilac mini skirt, and she had remembered my name. "Take my photo."

She sat beside me and placed her hand on my knee. Click.

"Take one of me and Rama," urged Dede.

As they sat back, ready to be photographed, four schoolboy friends of Dede pushed through the door and plonked themselves down on the floor in front of Rama. Then two older youths, one carrying a baby, sidled in and took up the remaining space on the sofa. Finally Rama’s mother, her uncle and aunt, two neighbours, and seven small toddlers came into view. The baby was crying, one schoolboy was scratching his groin and one was sticking out his tongue. Click.

Sweat was running down my forehead and over my glasses, leaving salty stains. I knew that I was there to be stared at and that the latest intruders were not going to go away. It was like being in an overcrowded broom cupboard with the door closed and several electric fires turned on.

It was raining as I left and I was followed by two of the youths.

"Where’re you going, mister?" asked the one with the earring in his nose.

"Back to my van," I explained.

"Do you like morphine?" asked the one with no earring, but lots of spots.

"Certainly not," I said, and began to speed along a series of little alleys and tracks until I had left them far behind.

The rain was of Bombay-monsoon proportions as I splashed my way up some steps to a house that I recognised. It was Melati’s house and I decided to seek refuge there.

"Hi mister." said Melati. "You help me again with my English?"

"If you’d like." I wiped the rain off my glasses and sat by the window.

"Some people say that," I admitted.

"So am I," said Tikus, Melati’s younger brother, who was dressed in sodden football shorts.

"You been playing football in the rain?" I inquired.

"You like music?" asked Melati, switching on a tape.

"Very good. I like dangdut. We don’t have it in England." But the music wasn’t dangdut.

"You like Michael Jackson?" asked Tikus, and he began a much exaggerated version of that singer’s dancing.

"Here’s my English text book," said Melati, handing me a thin publication, and turning down the music.

I opened it and began to read. "Ade meet his friend. They are going play badminton" I put the book down and closed it.

"You teach me words. What is this?" she said in Indonesian, as she pointed at the floor.

"What is this?" asked Tikus, not wanting to be left out.

"Your sister’s T-shirt." They looked puzzled by the string of words.

"Mister, we need money," said Melati, changing the subject, and pleading with her big dark eyes.

"I only give money to people who are ill."

"I have a headache," said Melati brightly, as she held her hand to her brow.

"Then you should rest. I must be going."

"I’m very thin, mister," added Tikus, as he held in his tummy, and then turned to show the meagreness of his rump.

A girl, who was genuinely wraithlike, stood grinning at the door. This was Melati’s sister, Dian, aged about eighteen, and cute like her sister.

"Yes. She’s got TB," said Melati, emphasising the words to ensure I got the message.

My mood changed from flippancy-mode to serious-mode. "Is she getting any medicine?" I demanded.

"No. We can’t afford it," explained Melati.

"Why didn’t you tell me last time I was here!" I complained. "You are strange. Look, she must go immediately to the hospital for medicine. It can take a year to get better. She must take a cocktail of pills every day. You’ll all need a check-up." I think I used the word bodoh, meaning ‘stupid’. It’s difficult to be subtle when you don’t have mastery of the language.

I handed over some money.

"I must have receipts," I said. "And I’ve given you enough money for you all to have an x-ray. Is that OK? "

"Look the rain’s stopped," I said. "I have to get back to Jakarta." I stood up, avoided shaking hands, and escaped into the cooler air of the alley. I would need to remember, next time I visited Melati, to keep a distance from anyone who coughed, and to avoid touching the hand of anyone who looked unusually thin and pale.