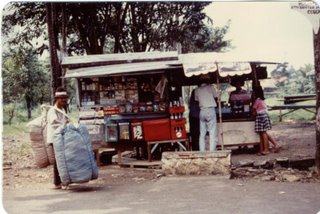 It was a Saturday and I had lots of people to visit.

On reaching Jakarta’s crowded Mayestic market I set about trying to find thirteen-year-old Hamid, the seller of newspapers who claimed his father had been shot dead and who claimed he had run away from his granny.

A shoeshine boy directed me to a dark indoor market, a bit like an underground car park, and the little shop where Hamid was working. The shop consisted of sacks of grains and spices and various canned goods.

"Hey mister, how are you?" said the slightly scowling, dark-eyed runaway.

"Are you interested in a trip back to your grandmother?" I asked.

"OK," came the shy reply. There was a hint of hesitation.

"Good! Let’s go to my van and you can give the driver directions." I was elated at his change of attitude. I hurried him to my vehicle and we set off at speed.

After about thirty minutes we reached rice fields on the edge of Jakarta and then turned onto a narrow road running past some humble shacks.

I looked at the simple houses with their grimy walls and wondered what sort of life the grandmother lived.

We got out of the vehicle. On our left stood two down at heel habitations. On our right there was a mansion. Hamid led us towards the latter.

"Grandmother’s house?" I gasped. The two storey mansion had a mock-Tudor look.

"She must be rich. This place is huge!"

"My grandfather was a banker. He’s dead now."

The garden had its fair share of weeds and the paint on the windows was flaking, but this was the house of one of the elite.

The front door was open and we entered the large front room where we were met by a bright-eyed boy slightly younger than Hamid.

Grandmother appeared. She looked small, grey, weary and disappointed with life. For the lost boy there was neither hug nor warm smile of greeting. We were invited to sit down on a well-worn settee next a dusty pot plant. Hamid muttered a few words to his grandmother and then there was a moment of silence.

"I found Hamid in Pasar Mayestic," I said, by way of explanation.

"He runs away sometimes," said grandmother in a tired voice. "He doesn’t always attend school."

"Maybe the school’s not very good," I said.

"Hamid is not bright," said granny, putting her hand to her head, as if to suggest Hamid had something missing up top.

"What about his brother Dede? Does he like school?" I asked.

I let the information sink in. I guessed that granny had written off Hamid’s mother and new father as useless cases. I guessed she was not happy at having Hamid dumped on her.

"Is Hamid’s mother your daughter?" I asked.

"No. She’s my daughter-in-law. She was married to my late son," said granny.

"Hamid said your son was murdered," I said.

"Where do Hamid’s parents live?" I asked.

"Ten minutes from here," said grandmother. "Do you want to meet them?"

Hamid and I hopped into my van and were driven along a bumpy path to an estate built for the much less affluent, a place of litter, graffiti, tall weeds and stray dogs. Hamid’s mum’s home was a simple and basic concrete structure. The front door was open and we entered a room with little in the way of furniture; I was introduced to a relaxed looking mum and dad.

The couple were in their early thirties, thin, and poorly dressed but showed no obvious signs of drink or drugs. Again, as on our arrival at Granny’s house, there were no hugs for worried looking Hamid. Mum brought me a glass of water. Like her husband, she seemed friendly and polite, but why had she not put her arms around her son, or given him some sign of welcome? Why had she not started questioning Hamid about his absence and his return?

"Hamid said he wanted to come to visit granny," I said, breaking a long moment of silence. "I wondered why he doesn’t live with you here." I smiled, to compensate for my bluntness.

"He truants," she said, by way of explanation. "He’s not good at school." She smiled.

"He seems quite bright," I said.

After we had chatted about trivialities for a few minutes, Hamid’s father decided to go outside to have a smoke with his friends, and then Hamid’s mother decided to go off and clean the kitchen. What was I to make of these two parents? They reminded me of certain of the nurses in one of the hospitals I had visited: self-indulgent, empty-headed, cold-hearted and thick-skinned. I had expected them to kill the fatted calf for the return of the lost child. Instead there was strange indifference.

"Shall we get back to granny?" I asked Hamid.

Hamid nodded and we returned the van. The drive back was in silence. I was feeling uneasy.

"I hope he’s going to stay here," I said to granny, once we had returned to her front room.

She didn’t say anything.

"Are you staying here?" I asked Hamid.

We all shook hands and off I went, leaving behind a tense and angry looking boy.