15. A LOVER LIKES HIS LOVED ONE TO BE POOR 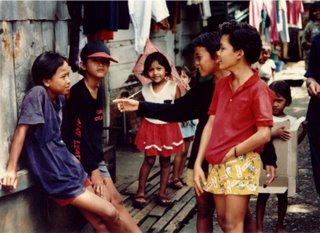 "To Wisma Utara," I instructed Mo.

The traffic moved slower than a wingless pigeon as we journeyed past the discoloured concrete shops and restaurants on the dusty highway called Jalan Fatmawati. It was nearly twenty four hours since I had put Min into Wisma Utara and I was desperate to see him. I had been worrying about him since waking that morning. Would he think he had been abandoned? One hour after leaving work, I reached the children’s home.

I entered the lounge, with its faint aroma of urine, and there sat Min, solemn and sad, watching TV. Sitting next to him were Joan, half blind Tedi, pretty Diah, and bubbly nosed Dadang. At first Min didn’t notice my entrance. Then he turned and caught my eye. He jumped up from his seat, hurried towards me and took my hand. I ruffled his hair and his eyes sparkled. A lump came to my throat.

"How’s Min?" I asked Joan who looked tired, like a peasant woman who had too many rice fields and too many children to look after. She stood up and made an effort to smile.

"Just fine, Mr Kent," she responded. Her thick dark hair was cheaply cut, her legs were bare and her sandals were plastic.

"Is Min behaving himself?"

"Can I take him for a walk? Maybe someone can come with us?"

"Certainly," she said. "Dan’s been looking after Min."

Youthful, amiable-looking Dan, wearing cheap T-shirt, slacks and plastic sandals, took Min’s hand and we set off through the local kampung. Although this was Jakarta, it seemed as if we were in a country village. There were banana trees , peacock flowers, clumps of bougainvillea and simple houses and tiny gardens, full of babies, cockerels and washing. Min was like a happy colt that had been allowed out into the fresh air. He laughed at a cat that darted across our path, jumped when a small dog barked and stared excitedly at a kite in the sky.

"We have a school at the home," said Dan softly. "Min goes to that."

"Some of the kids can’t do anything much, but I think Min can learn to kick a ball and hold a racket."

"Min’s speech is very limited," I said, "but in other ways he seems quite bright. He looks at you in a sensitive way."

We reached a wooden hut outside which stood a young teenage boy one of whose eyes was white and sightless. I decided to be friendly and stop to chat.

"Hello mister," said the kid, smiling politely at me, and giving Min a sympathetic look.

"What happened to your eye?" I asked White-Eye.

"I’ve had the problem since I was small. The doctor says it’s now too late to save it."

"Maybe glaucoma," I said. "Is this your house?"

We stepped inside. The one roomed house was just big enough to take a bed and four people standing very close together.

"How many people sleep here?" I asked White-Eye.

"Seven. I sleep under the bed with my brother and sister."

"Britain used to be like this," I said, as we made our exit. I felt like a time-traveller. I had moved, within a matter of minutes, from the late 20th Century buildings near Fatmawati to wooden huts that could have been built during Britain’s Middle Ages.

Having bid farewell to White-Eye, we continued our stroll. There were more questions I wanted to ask Dan.

"At Wisma Utara, are all these children from fairly rich families?"

"Yes," said Dan. "Apart from Tedi, whose mother’s blind and makes her living from massage. Tedi may have to leave soon, as his mother’s behind with her payments."

"Some of the orphanages I visited seem to take only rich children," I said. "You have to pay to get a child in. There doesn’t seem to be any free orphanage that’ll take street kids who’re mentally backward."

"You have to pay for everything in Jakarta."

"What do you get paid each month?"

"About twenty dollars a month," said Dan, grinning. "I send some of that to my parents in the countryside."

"The lady who set up Wisma Utara did it for her handicapped son," I said. "Does the son stay at the home?"

"The son went back to his mother," explained Dan. "He claims one of the staff hit him."

"Oh dear. Do you think someone really did hit him?" I was immediately worried about Min.

"Maybe somebody restrained him," said Dan smiling. "Nothing serious."

After our stroll we returned to Wisma Utara’s lounge where I sat with Min for some time watching TV. When it was time for me to leave, Dan was kind enough to hold on tight to Min. Dan seemed to have the knack of handling Min in a calm and gentle manner. I felt reassured that he had been chosen to be Min’s minder. But I did note a deeply pained look in Min’s eyes as I waved goodbye.

I drove to South Jakarta’s Blok M shopping district to visit Daus, the boy who had had the operation to remove the lump on his face. Blok M had once been covered in orchards; now it was covered in oily buses, choking traffic fumes, potholed pavements, grubby office blocks, crowded markets, Japanese nightclubs and seedy hotels. Near Blok M’s bustling bus terminal, I found Daus helping his aunt at her stall which sold cold drinks. Some weeks had passed since teenage Daus had had his operation. Having lost both the bulge and the stitches, Daus looked happy and well. He wore a new flowery shirt and a wide grin. The doctor had said that Daus would never be completely cured, but at least he now looked more normal. I got a free drink of cola before happily heading off for home.