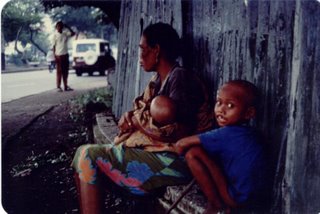 On returning to Jakarta, the first place I visited was Wisma Utara. Min was having one of his down days and refused to take my hand.

"Have his parents been to visit him?" I asked Joan.

I thought of Hari, the kid in Sukabumi, who presumably didn’t see too much of his mother. Maybe Min’s family were all busy working.

"I’m off for a walk with Min," I explained. "I want to see if Iwan’s back yet to get his leprosy medicine."

Iwan was not back.

"He’s still at his kampung in Karawang," said a thin little man, who was standing beside a rubbish cart. He wore shabby clothes and had a grin that suggested possible slyness or a lack of intelligence.

"Do you know his address?" I asked.

"I’m worried," I said, "because he’s not had his leprosy medicine for weeks and weeks."

"I could go and bring him back," said the man.

I gave him the money for the bus.

Hamid, the runaway I had found in Pasar Mayestic, had not been visited for some time, so I drove with Min to Hamid’s grandmother’s mansion.

"How’s Hamid?" I asked granny, when she came to the door.

"He’s run away again," said the tired looking woman. "Probably gone back to the market."

"What went wrong?" I asked.

I returned with Min to Wisma Utara. At least Min was in a safe place.